Recently the internet has been all abuzz over Wolverine and his impending new movie. We here at Nerds on Earth are nothing if not hip to what’s hot on the internet so we’ve been talking about Wolverine, too.

We’ve covered his genetic line and even how many times he’s had his mind wiped. Really, we just want to fit in and feel wanted. 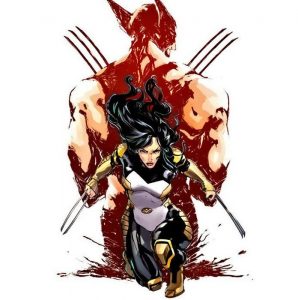 Rumors surrounding the next Wolverine movie have also involved another mutant’s name; one we’ve yet to see represented in an X-Men film:  Laura Kinney, or X-23.

In my opinion, 2005’s X-23: Innocence Lost is an absolute must read for anyone looking to get a handle on the character. Craig Kyle and Christopher Yost cram an awful lot of history and tragedy into six short issues.

And it all begins with science!

Dr. Sarah Kinney, the leading authority on mutant genetics, is hired by a sort of shadow corporation that calls to mind Weapon X. She’s tasked with providing their team with a specimen that can withstand the adamantium bonding process that gave Wolverine his trademarked claws.

The company is in possession of some of Wolverine’s DNA, but the Y chromosome is severely damaged, so Kinney’s attempts to make a direct clone fail time and time again.  She suggests ditching the damaged Y chromosome and duplicating the intact X chromosome to significantly increase the chances of success, but she’s shot down.

She works secretly on duplicating the X chromosome in the hopes that it will produce a viable embryo, and succeeds with trial 23. The corporation forces Sarah to serve as the embryo’s surrogate mother, and she carries it to term at which point the female is born showcasing a pair of retractable bone protrusions on the back of her hands. 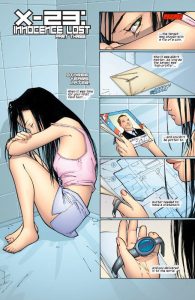 X-23 is weaponized both physically (adamantium bonding to her bone protrusions on her hands and feet) and mentally (extensive training, stimulus deprivation, etc).  She makes her first kill at the age of seven when her trigger scent is tested on the handle of her martial arts trainer’s sword – the one other person outside of Sarah that treats her as something more than a weapon.

By age 10, she is routinely hired out for assassinations. She is kept isolated in a padded room until a mission comes in the form of an envelope outlining the assignment and a watch giving her a deadline.

However, in the midst of her training and death dealing, Sarah Kinney sneaks in human affectations and affection. Now she and she alone sees and treats X-23 as human.

X-23 is later abandoned on a mission and presumed dead. She returns to the facility much to the surprise of some and the chagrin of others, but not undamaged. Sarah begins to find evidence of self-harm on X-23’s forearms. This upsets Sarah, who then receives a phone call from her sister: Her niece has been kidnapped.

Sarah puts X-23 into the field without permission and X gets the job done, but Sarah realizes she’s no better than X-23’s handlers herself.

Sarah then sets X-23 on one last mission: Her own escape and the destruction of the program that created her. 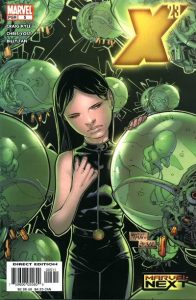 X-23’s first stop is a sort of vat room where the company is growing more viable embryos with the same end in mind: Hiring or outright selling them to the highest bidders. She rigs them all up with explosives then sets off after the mastermind of the whole project, a man named Zander Rice. After dispatching him, she reunites with Sarah right outside the facility, but that’s where this synopsis will end!

Innocence Lost is a fantastic foundation for X-23 as a character. A ton of stuff is established beautifully and well:

The last item on that list in particular is well engineered. As much as X-23 metes out death in these six issues, she is without a doubt the primary victim in the six issue arc. Knowing where she came from colors what she’s doing – particularly now as the new Wolverine.

And my gosh…she’s a child during this whole series! Innocence lost, indeed.

The arc definitely establishes X-23 as a badass of the highest degree, but you feel sorry for her the entire time. While violence and great art are evident, its the drama, the emotion, the humanity and the lack thereof that make Innocence Lost the standout comic that it is.

I highly recommend reading this comic series before she makes her big screen debut!

It is available in its entirety on the Marvel Unlimited app or here from Amazon, where it’s become somewhat of a collector’s item due to the popularity of the character.