The importance of Chris Claremont’s Uncanny X-Men run can’t be overstated. It was the best selling comic book on the spinner racks month after month and outside of GI Joe, no other comic even came close. So, while the current movie popularity of Captain America and Iron Man have created a narrative that their comics have always been chart toppers, that was hardly the case. All other comics and characters played second fiddle to Claremont’s X-Men.

But where did the concepts for those mutant characters come from? From the pencil of a man named Dave Cockram, that’s where. And here is that uncanny story of how Cockrum designed a team of mutants that awed a generation of comic book readers.

When he was a young man, Cockrum was known as a “letterhack,” a fan who frequently had letters printed in comic book letter columns. In fact, one such letter began a pen-pal relationship with Andrea Kline, who later became his first wife.

Cockrum was still in the Navy during his early days of fandom, but he always had dream of being an illustrator. He and Andrea were stationed on Guam for a brief period. During stormy evenings and with no power, he and Andrea would keep themselves occupied by making up characters. Cockrum had folders full of these characters.

The idea for an international team book was first tossed around at Marvel in 1972. Wanting to appeal to foreign markets, Roy Thomas wanted to do an X-Men book with mutants from all around the world who operated out of a secret base.

After a years long pause in the development, Len Wien was now involved and approached Cockrum about pitching him some character designs. Let’s look at three of them.

The original female in the group was to have been called The Black Cat. She wore a collar with a bell on it, but otherwise had Storm’s costume but without the cape, and a cat-like haircut with tufts for ears. Her power was that she could turn into a humanoid cat or a tabby.

But when Marvel came back to the project after the long hiatus, a variety of other female cat characters like Tigra had sprung up, so Cockrum gave the original concept a significant reworking.

One shift was the white hair, which Cockrum had to lobby to keep. While everyone said that she’d wind up looking like somebody’s grandmother, Cockrum said, “Trust me.” The rest is history.

During his time in Guam, he and Andrea made up a duo that consisted of a guy called the Intruder and his demon sidekick, Nightcrawler.

Says Cockrum, “The original concept was a lot different in that Nightcrawler would howl at the moon, run up the sides of buildings and do all kinds of weird sh*t. He really was a demon who had screwed up on a mission from hell and, rather than go back and face punishment, he hung around up here with this do-gooder. So he was considerably overhauled when he wound up in the X-Men.”

Ironically, it was Cockrum’s second wife, Paty, who later on had further influence on Nightcrawler. Chris Claremont liked her suggestion that the blue skin was actually short fur that had the feel of velvet, so he then incorporated that into the canon.

Even though he was plotted to die early in order to make a statement to readers that being a mutant was dangerous business, Cockrum was also tasked with creating Thunderbird. Alas, when Dave Cockrum handed in his original costume design for Thunderbird, everybody thought he looked more like an Air Force pilot rather than a Native American warrior.

But, although Dave went back and redid the look, later flashback stories gave Thunderbird a military background. Then, 100 issues after Thunderbird’s appearance, Marvel introduced his younger brother who wore a simulacrum of this costume.

Nothing creative goes to waste. From Wolverine’s iconic tufts of hair, to an ill-advised Go-Go outfit for Jean Grey, and an early Phoenix design that ultimately became Oracle from the Shi-ar Imperial Guard, Cockrum had tons of early designs that morphed and grew into what we’ve known for decades. Cockrum had an indelible impact on the look of the Uncanny X-Men and for that, we’re grateful.

Dave Cockrum died in 2006 after a prolonged battle with diabetes. But his character concepts live on in the hearts of X-men fans everywhere. 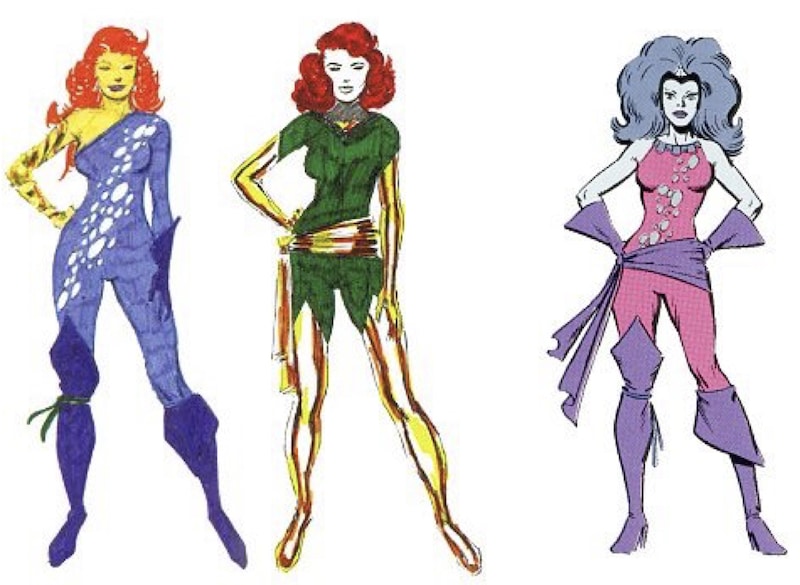 Here is a deeper dive if you want to explore the lore of Dave Cockrum’s early designs: Cosmic Teams | Blackhawks | The Strangers

How to Give Your High Level RPG Encounters a Proper Challenge