Just How Many Times Has Wolverine Been Brainwashed, Mind Wiped, or Manipulated?

We recently published a post that outlined Wolverine’s complicated family tree. With comics as confusing as H. E. double hockey sticks, one needs to be a walking Official Handbook of the Marvel Universe to pull off a feat such as that, which is tricky, being that you’d be a walking comic book and all.

That post got me thinking though. Could we also try to follow the story thread of the many times that Wolverine has had his mind wiped, altered, or controlled?

Because good gracious, the ‘ole Canucklehead has a history of amnesia, mind control, manipulation, and general memory trauma longer than a printed receipt from Home Depot. Seriously, have you been to Home Depot recently? What’s the deal? Those long receipts are ridiculous.

But I don’t want to just recite comic tales. I want to pull a little philosophy into this, even if the thought of reading philosophy might cause you head trauma, due to the massive boredom created by it.

Most people know John Locke as a character on Lost. But John Locke was a real person, living in 17th century England. He was a hugely influential philosopher and thinker, with his theory of mind often being cited as the origin of modern conceptions of identity and the self, and figuring prominently in the work of later philosophers such as Hume, Rousseau, and Kant.

Locke’s work explored questions such as: ‘what is personal identity?’ and ‘what makes a certain person a person?’ 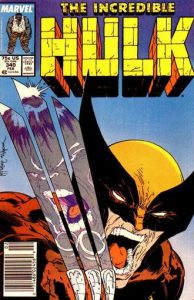 John Locke rejected the idea that personhood was simply a body or physical characteristics. He instead argued that memories are the primary source of personal identity. Your memories are what make you you, in other words.

So if memories gives us a person, then Wolvie, the poor ‘ole Canucklehead, who has had his mind twisted so many times, becomes and extremely interesting case.

What would John Locke think of Wolverine, assuming he’d be a comic reader? Well, Locke would say that Wolverine, who commonly has memories that aren’t connected together in time, would exist as if he were a different person.

So how many Wolverines have we seen?

The 2002 Origin miniseries gave us the most Wolverine back story we’ve ever got. In it we learn about young James Howlett and his travails, but most interesting for this article is that after returning to Canada, Logan is recruited by Team X, where he has his memory erased and replaced with memories of a life that no one ever lived.

Then, while a member of Team X, Logan was abducted into the Weapon X program. Once again, he has his mind erased and was given the name Mutate #9601.

As Mutate #9601 he led a brutish life until the Winter Soldier (a brainwashed Bucky, another character where we could do this same exercise!) frees him. This leads to Wolverine going feral in the Canadian woods, just before his famous first fight with the Hulk. With no memory of what he was doing in the woods, he is discovered by James and Heather Hudson (Alpha Flight).

This begins the Wolverine we all know and love. But a couple things happened in that time. One, Apocalypse captures Wolverine, brainwashes him, and turns him into his horseman Death. 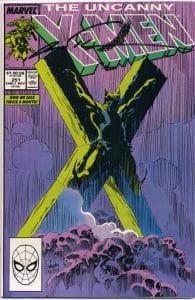 Then Mark Millar took over the Wolverine solo series in 2004 and began a storyline called “Enemy of the State,” which saw Gorgon, the then-current leader of the Hand, start to murder superheroes and resurrect them as brainwashed servants. Wolverine became public enemy #1.

Wolverine was forced to attack his friends in the Fantastic Four and X-Men and kill numerous SHIELD agents. He was finally captured and regained control of his mind after a lengthy, painful deprogramming session. But the damage to his reputation had already been done, and the events were what motivated him to join the original New Avengers roster shortly after.

Around that same time period we read the conclusion of House of M, where Wolverine’s body heals from Scarlet Witch messing with his mind, and he finally has all of his memories restored, which only raised more questions about Wolverine’s past.

In Jason Aaron’s Wolverine (Vol. 4) the very first story arc saw Wolverine fall victim to a spell that trapped his soul in Hell while his body was overtaken by demons on Earth. Wolverine eventually clawed his way out, regained control of his body, and went after those who were responsible.

He took the fight to the villains in question, brutally slaughtered each and every one of their mutant bodyguards. The twist came when he viewed a recorded message the leader had left behind that revealed that each of the bodyguards Logan had killed was one of his own bastard children.

But what we know for certain is Wolvie is the head-trauma king, making our comtempory discussions of concussions seem pedestrian.

Every time Wolverine is severely injured in his brain, there is brain damage. And every time the ‘ole healing factor kicks in and repairs it, we are looking at a new Wolverine. And even in cases of light brain damage where the whole brain isn’t affected, the healing factor still manages to reorganize the brain so quickly that it’s significant. I think. It’s comics, so I’m not super sure.

I do know that we all need to cut Wolverine a little slack though. After all, he’s got a lot going on in that head of is.

An Introduction to Skullkickers, a Great Fantasy Themed Comic by Jim Zub

Nerd Obsession: Chris Claremont, the Man Who Defined the…