By Michael Adkins On May 30, 2016 Last updated Aug 9, 2018
Share TwitterReddItPinterestFacebookEmailPrint

Wolverine’s DNA is all over the Marvel universe…but not in a gross, CSI kinda way. Between genetic manipulation and Wolverine procreating the old fashioned way (ask your parents), the comics are crawling with guys and gals who owe a large portion of their genetic makeup to old man Logan. Some literally, some figuratively.

And we’re just talking the 616 here, guys. Wolverine’s canonical genetic line in other universes is just too much for a single post.

To keep things simple, I’m going to start with a couple of characters whose genetic ties to Wolverine are derivative; i.e. they owe their DNA to a setting much more sterile than a bedroom. Like laboratories. Then we’ll tackle his legitimate offspring. 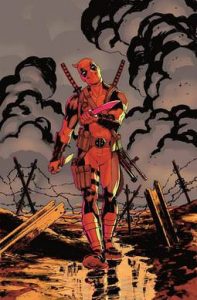 Arguably the most famous of the trio of 616ers that owe their healing factor to Wolverine’s DNA and a syringe.

The recent movie suggests Deadpool’s healing factor is the result of latent mutant genes that Ajax is able to awaken by torture, and while this cements Deadpool as a mutant in the movies, it is less clear in the comics.

After he was diagnosed with cancer, the Weapon X program – yes, the same one that experimented with Wolverine himself – endowed Deadpool with Wolverine’s healing factor artificially. They borrowed some of Wolverine’s DNA, tinkered with it to amplify its capabilities, and injected it into Wade Wilson which simultaneously basically cured his cancer and gave us the Merc with a Mouth that just won’t die.

Laura Kinney’s origin story is contained within a six issue arc from 2005 entitled X-23: Innocence Lost and literally everything about it is awesome.  A top secret agency is charged with making a second Wolverine – one that could withstand a similar adamantium bonding process to the skeletal system. 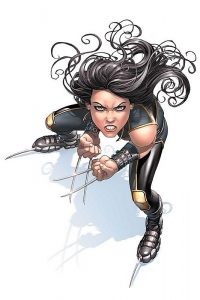 d attempts at cloning from a damaged DNA sample of Wolverine’s, the lead scientist, Sarah Kinney, decides to break protocol, violate orders, and substitute an X chromosome for the damaged Y. Eventually a viable embryo is developed and she carries it to term as a surrogate.

Oh, and the viable embryo is attempt #23. Thus the name.

Along with the healing factor, X-23 inherits sharp, boney protrusions from both her hands and her feet which are later coated in adamantium as part of the program’s weaponization of the then preteen X-23.

That’s all I’ll get in to for the sake of this post, but you should definitely read X-23 – Innocence Lost which is available in its entirety on the Marvel Unlimited app.

OH!  And she is the current Wolverine, and those issues are just now hitting the MU app, too. 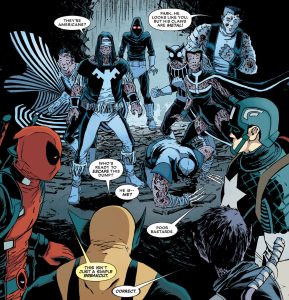 A deep cut here, but he’s legit albeit short-lived.  As best I can tell, Park was a prisoner in North Korea who was somehow or another imbued with strains of Deadpool’s and Wolverine’s DNA in an attempt to create a crew of North Korean super soldiers.  Others were subjected to a similar process, only with other X-Men genetic donors like Storm, Colossus, and Cyclops in addition to Deadpool’s.  Apparently Wilson’s DNA was a necessary ingredient in order for the mutations to take hold.  That’s why they all look like zombies.

We’ll start with the most famous of Wolverine’s direct offspring: Daken.  He is the son of Wolverine and 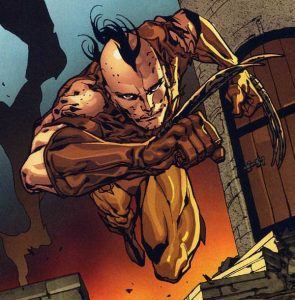 a Japanese woman named Itsu.  He, too, has accelerated healing and claws – just like his old man.  He was born in 1946, stolen straight from his mother’s womb, and raised by a Japanese couple.  That whole story is a bloody mess, too!

He and Wolverine are constantly at one another’s throats (literally), and he even takes on the mantle of Wolverine under Norman Osborne on his Dark Avengers team.  The father and son fight…like, a lot.  Daken is one angry dude, and Wolverine does what he has to to keep him in check.  Wolverine even kills him outright once, though that scene does offer glimpses into both party’s thoughts of how things between them might have been.

Both figured there would be a lot less blood.

The next five members of this list come together under an organization called The Red Hand which is comprised of people who feel Wolverine ruined their lives and they’re out for revenge.  The Red Hand figures that since they would have a really hard time killing Wolverine himself that they would target people, places, and things he was fond of.

Each became a member of the mutant team The Mongrels, and each was eventually summarily dispatched by Wolverine.  He doesn’t know that they are his children until after they are all dead.

Gunhawk is the only member of the Mongrels who has a name of his own.  William Downing (real name) is the son of Wolverine and a Canadian woman named Dolores Downing (she’s also the only mom we have a name for).  William is a highly trained mercenary (really all of them are) who brought guns to a knife fight and lost.

Real name: Unknown.  Mom’s name: Unknown.  What we do know about the guy is that he got pretty much everything Wolverine’s DNA had to offer:  strength, speed, stamina, agility…his dashing good looks (sarcasm…He’s the big ape-looking one).  All, it seems, except for the healing factor.

Why is he called Cannon Foot?  I’m glad you asked, because the answer is funny to me.  He just loves a good kickin’.  One source I found said that he carries stones around in a pouch and kicks them (like cannon balls) at his foes.  Regardless, Wolverine cuts off one of his treasured feet and then kills him. 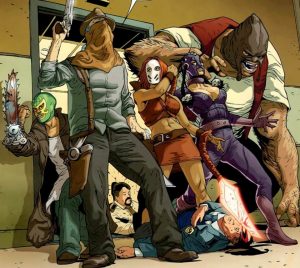 Both he and his Mexican mother remain nameless and aside from mercenary training, he has no powers or abilities to speak of…However he does wear a luchadore mask and wield a chainsaw.  So there’s that.

Guys, I’m just going to reproduce for you here what Marvel’s own wiki says about her because I don’t want you to think I’m reading into her appearance:

Keeping the streak alive, we again have no name for her or her mother.  She wields two knives that emit heat, but she appears to be no mutant herself.  Only Cannon Foot has the pleasure of a mutation.

So there you have it:  Wolverine’s 616 offspring and derivations.  Of the nine listed, only Deadpool, X-23, and Daken are alive in current continuity.  Turning out to be a Summers brother might be a joke, but finding out you’re one of Logan’s kids is practically a death sentence!

Editor’s Note:  We’re also aware of a boy named Erista, but it seems Marvel was just like, “Eh, here’s a baby,” so we left him off the list.