By Jason Sansbury On May 29, 2016 Last updated May 29, 2016
Share TwitterReddItPinterestFacebookEmailPrint

It is hard for us to remember that when the first X-men moved came out in 2000, how revolutionary that film was. For the most part, we nerds were just excited because our heroes were on screen. We even didn’t get too bent out shape that Wolverine was being played by a famous Australian musical star.

When the second movie happened, we were grateful. When X-Men: Last Stand happened…we wept because they wrecked it.

And if X-Men Apocalypse is seen as a part of that, it is a solid middle of the road film. It isn’t nearly the worst in the franchise that Fox has released. (X-Men Origins: Wolverine is clearly the second worst.) But it isn’t the best either.

X-Men: Apocalypse comes as the third since what is widely considered the re-boot: X-Men First Class. That movie took the interesting angle of re-starting the franchise, set in the 1960s with all different line-up and characters, with the main focus being on the shape changing Mystique, played by Jennifer Lawrence, Professor Charles Xavier, a telepath played by James McAvoy, and the master of magnetism Magneto, as played by Michael Fassbender.

X-Men First Class ends with a giant finale involving the Cuban Missle Crisis. The next film moved up into the 1970s and this one is set in the 1980s. (And lest you forget, they have crammed in many, many reminders that this is the 1980s; I think they were supposed to be humorous at times but no one in my packed theater audience ever laughed.)

The villain of this movie is Apocalypse, of course, played by media darling Oscar Isaac, an award winning actor, who thankfully, will be able to escape this embarrassment of a role because of the amount of make-up he was buried on. And, like many superhero movies, this movie suffers from a lack of any sort of character development on the bad guy.

Apocalypse’s deal? He seems to think the world is bad and that he will remake it, essentially plowing it under. What we don’t ever get is a deeper development of why the world is so bad, or what his new world will look like. They play for a few minutes with a nuclear disarmament angle but it is quickly abandoned; I suspect there is a script somewhere that had that focus and more, especially given this is a 1980s movie but we will never see it. 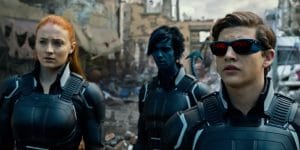 What we do get in this new movie are some of the iconic characters, either reintroduced or introduced for the first time. We get a interesting Cyclops, a new Jean Grey, Nightcrawler, joining alongside Quicksilver, who was introduced last film, the Beast, Mystique, and Charles Xavier.

This movie suffers from an issue that all big budget movies seem to fail with: they want to destroy the whole world. And the audience is just fatigued by it. No one cares if London falls, or Washington gets blown up or more, unless it is tied to a good story! (Earth Nerd Clave deserves some serious love for prophetically pointing out what has made 2016’s good superhero movies work: they are small, contained stories and the audience is rooting for Deadpool and Captain America (or Tony Stark, if you have no soul). He wrote about it in January and I really wish more movie producers take note!

So, again, this movie won’t surprise you. It is 15-30 minutes too long, which is true of nearly all the X-Men films. It resolves in a big battle where someone just goes more powerful mutant than the bad guy mutant of this film.

It used one great 1980s song but missed a soundtrack bonanza. (Does anyone understand that Guardians of the Galaxy and its quirky style works because of its soundtrack?!?) It will give you some 1980s jokes. 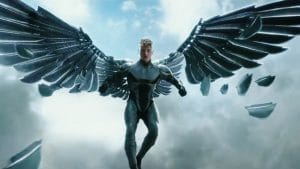 Truthfully, I’d love to see them decide to take another bold risk, going all in on the story of young students at Xavier’s again, either in New Mutants or using the team that is waiting at the end of this film. Or, even better, cut a deal with Marvel and push us towards what we all want: Avengers versus the X-men. At least that may be an interesting story and an interesting villain.