If you’re paying any attention at all to my posts or my Twitter feed or my phone background, you know that I think Laura Kinney and Honey Badger are the best things going in the comics world right now.  In my mind, there isn’t even a contest.

Laura’s stint as Wolverine (in All New Wolverine) was excellent, but you knew it had an expiration date on it beginning with issue #1 because there was no way Logan was going to stay dead.  Le sigh…

But All New Wolverine did bring us Gabby aka Honey Badger and she is an absolute delight and I’ll fight anyone who thinks otherwise.  Where Laura goes and whatever moniker she might be operating under, so too goes Gabby.  This has been true since Gabby’s introduction within the pages of All New Wolverine, and it continues to be the case in both X-Men Red and now the new X-23 series.

This X-23 comic just wrapped on its first arc, “Two Birthdays and Three Funerals,” and there’s much to talk about.  I mean, besides the fact that is stars both Laura and Gabby.  For me, that is enough!  But the writer and art team deliver that delightful package with excellence.

Clones are no novelty in the Marvel Comics world; not even remotely.  The Stepford Cuckoos are clones of Emma Frost and have very similar power sets (telepathy and a diamond form).  Since their introduction back in 2001, this blonde bombshell hive mind has seen quite the fluctuation in numbers.  They were once the Five-in-One, then the Four-in-One, then the Thousand in One – before settling into being the Three-in-One after the deaths of Sophie and Esme, respectfully. 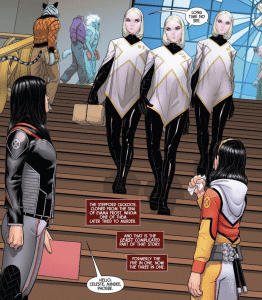 Only “settling” isn’t the right word, as this first arc of X-23 has the Three-in-One (Mindee, Celeste, and Phoebe) trying to find suitable hosts for the consciousnesses of their departed sisters.  As it turns out, the host bodies are quickly depleted by the psychic connection amongst the sisters…but a scientist the sisters mind-jack assures them that X-23 or one of her clones would be a workable host given their extreme healing factors.

That brings the two sets of clones into conflict, of course, when the Cuckoos abduct Gabby and attempt to transfer Esme’s mind into her body.

But all of this clone craziness isn’t just plot and pictures in X-23.  The writer, Mariko Tamaki, devotes a lot of letters to exploring the very idea of clones.  On the “Did Adam have a bellybutton?” kinda front, she asks “Do clones have birthdays?”  But more significantly, she plays with the word “sister.”  Both Laura and Gabby and the Cuckoos use the term.  In some ways, the relationship that that term refers to is showcased similarly between the two sets of clones; for instance in the ways each makes sacrifices for those they call sister.  But they also diverge meaningfully as well…I can’t say too much more without spoiling elements of the plot, but suffice to say that family – another concept interesting to ponder with regards to clones – is portrayed very differently between the two sets of clones featured.

I’m still unsure how Sophie ends up in Laura’s mind…I mean, I can make an educated guess, but I combed the issues over two or three times trying to find a straight answer and didn’t find one.  And the final battle was a bit less climactic than I’d hoped.  But overall, the story was intriguing.

The Art Is Killer

Juan Cabal (who is joined by Marcio Fiortio in issue 5) and Nolan Woodard deliver some delicious eye candy through the first five issues of this series. Click to embiggen.

The emblems on each of the Cuckoos’ shawls COMBINE to form the iconic X. Just a small, cool detail!

Neat depiction of what a battle with the Cuckoos – or any telepath – must feel like. Chaos and confusion and overwhelming.

I don’t have a deep reason for liking this particular image besides that its pretty.

Laura done got duped by the Cuckoos. Neat use of space and parallels.

I love it most when I can enjoy both the writing and the art style of any given book.  That doesn’t happen all the time, unfortunately…but it also doesn’t happen with disturbing frequency thankfully!  The team helming X-23 are a good match and bring something noteworthy to the title in each of their areas.

Laura and Gabby Continue to Be the Best

This Cuckoo arc was an interesting opening salvo for what I hope will continue to prove to be a comic worthy of subscription.  They’re putting Laura and Gabby into a mentor/mentee relationship that I 100% dig and that is augmented by their shared DNA.  There is a lot of good story left for these two across both titles (this and X-Men Red), and I couldn’t be happier.

PS: If Honey Badger ever gets killed…I will break something so that I can have the satisfaction of knowing that something in the world will share the condition of my heart.  Team Honey Badger 4 lyfe <3