Here at Nerds on Earth, we love comics. We even love comics from the Big 2 publishers, Marvel and DC. So with that in mind, it is time to give out the Nerdie for Most Excellent Comic Book Series from the Big 2.

The 2016 Nerdie Award for the Most Excellent Big 2 Comic 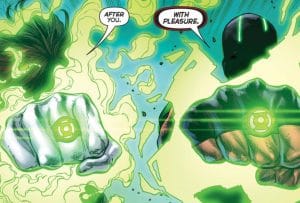 I will be honest. When the DC Rebirth phenomenon happened and I read almost all of the Rebirth issues and subsequent #1 issues, I didn’t expect this to be a book that I would like. (And, yes, if you are shaking your head: DC expected you to buy a book like Green Lanterns: Rebirth #1 and then realize the story continued in Green Lanterns #1. Because we wanted a fresh start, but didn’t want to make it easy or logical for new readers to stick around.)

But this story of two relatively new Green Lanterns, who are each unique in their own way is totally worth checking out. Even as someone who doesn’t know a ton of the Green Lantern backlore, I find it to be a fun, engaging book. 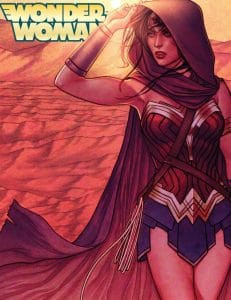 So they had me at Greg Rucka. It is no secret that we here love Greg Rucka as a comic book writer and as an novelist. Especially partnering him with Wonder Woman seems like an excellent idea, as he writes really strong female characters.

Additionally they have done a unique format that deserves to be talked about. Every issues rotates from a present day story to a story from Wonder Woman’s past and origin. That approach isn’t a perfect system but it does allow the same writer and artist to stick together over a longer time. In an era where we sometimes can only get 4-6 issues out of a great artist, this timetable seems to let them stay on longer.

The story has been really excellent and it is a worth contender on this list. And I am going to be really curious to see how they collect these in trades, either putting all the back stories together or keeping them in their original release order. 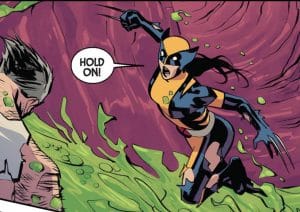 Listen, we love mutants. We especially love clawed mutants. And when Wolverine (Logan) died, it was a moment of sadness. But they passed along the title to Laura, formerly X-23, and this book has been stellar. It has the perfect amount of things that you want in a Marvel solo title: a great compelling story, a ragtag group of surrounding characters, the occasional connection with the wider Marvel universe.

Add in the idea that this is a young woman trying to find her way in the world, this is a great book, enough so that I was getting very angry when there was no sign of her in the recent X-book announcements until the very end of that PR sweep.

But the winner of the 2016 Nerdie Award for the Most Excellent Comic Book Series from the Big 2 is the audacious and stunning The Vision. First, the Vision is now a big deal, taking a prominent Marvel role in the movies.

And I have no idea how in the world with that factored in that Tom King was able to convince Marvel to let him tell this 12 issue story. I am picking the story in part because it is 1 complete run. The 12 issue narrative plays well with a beginning, a middle and an end.

Second, the premise is just from the start more than a little off: the Vision creates a family, (wife, 2 kids and a dog), moves to the suburbs and goes to work for an intelligence agency.

Third, it is a weird mix of Marvel comics plus the film American Splendor. It says something that the winner of the 2016 Nerdie for Most Excellent Comic Series from the Big 2 is a book that had so many risks around it. But it paid off in spades and I hope both the main publishers will let creators take more chances in the future!

Nerd Nostalgia: Looking Back at MASK, the great 80s Cartoon and Toy Line

Some Monsters and Scary Ghosts to Spread Some Christmas Cheer