Jason (Co-founder of Nerds on Earth.  Dusting off his d20s.) So, I am about to delve back into the world of role playing games after at least a decade break. So we are gathered today to talk about the two biggest RPGs built around wizards and dungeons and swords: Dungeons and Dragons and Pathfinder. Gentlemen: can you give me an overview of each?

Michael (Not to be confused with Adkins.) Well, let’s see. Pathfinder is essentially an offshoot of D&D. It’s a revision of D&D 3.5. Dungeons & Dragons is, of course, the original roleplaying game.

Jason An offshoot? What and why did it move away from the original?

Michael When D&D 3.5 came to an end, and Wizards of the Coast prepared to launch the 4th edition of D&D, there were a lot of 3.5 fans who didn’t want to move with it. Paizo (who publish Pathfinder) saw that that audience was there and so decided to produce Pathfinder.

Michael In a way, yes, I suppose so!

D&D 3.5 was published under the Open Gaming Licence, which allowed other companies to produce things for it. Paizo used that to develop Pathfinder.

The two games have diverged somewhat since then. D&D is now in its 5th edition, for example.

Clave (Co-founder of Nerds on Earth. The real hero here.)  Yup, you got it. Pathfinder feels very, very D&D as it’s a direct derivative. But Paizo has differentiated the line by producing some really good support books for Pathfinder. But the real crown jewels of Pathfinder are their Adventure Paths, which is a series of 6 books that sequentially level characters from 1 through 15. 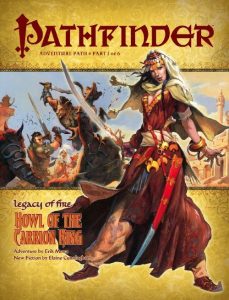 Michael Yeah, the Adventure Paths are very much what solidified Paizo as a company and Pathfinder as a game, I think.

Jason So there are a set of adventures that characters can work their way through, leveling up as they go?

Clave Yep. And the Adventure paths come are like Baskins and Robbins – there are 32 flavors. There is a pirate adventure, snowy ones, asian adventures, gothic horror, etc.

But D&D 5e has really been producing some fantastic adventures of late. The format is a little different, as D&D is producing big, hardback books a couple times a year as Pathfinder comes out with a smaller book each month. The bottom line is that it is a good time to be into tabletop RPGs.

Jason How much do you think the Pathfinder model has influenced what D&D is doing with its Adventure League approach?

Michael I don’t know a great deal about Adventure League, but I suspect the Pathfinder model–or the adventure paths at any rate–have likely had at least some influence.

The idea behind adventure paths–that of a whole, prepackaged campaign–has certainly been picked up by a lot of other companies.

Clave And companies are realizing that strong organized play (like the Adventurers League and the Pathfinder Society) is part of the cohesive glue that holds nerd communities together, so they are investing in it.

Jason So with the diversity of genres of stories in Pathfinder, does that mean they have an equally diverse set of classes? Races?

Clave Much, much more with Pathfinder. Pathfinder goes hog wild, for a couple reasons. One, they produce so much more content (“splat”, as it’s sometimes called), whereas D&D is taking a more measured approach with D&D 5e. But also because the setting for Pathfinder – Golarian – is a “kitchen sink” type setting, meaning there is a little something in that world for everyone. 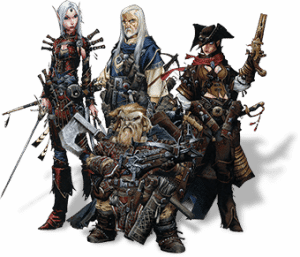 Michael Yep. All the D&D 3.5 core classes and races are there, plus lots more. Classes like alchemist, oracle, witch, etc. have really given Pathfinder its own identity.

Jason So if you were new to RPGs, is there a preference? Sounds like Pathfinder could be a lot to unpack potentially for a newbie…

Michael Pathfinder can be a lot to unpack for a newbie, it’s true. D&D 5e is more streamlined, so can be easier to enter from that perspective.

Jason And from what you all are saying, Pathfinder is one large interconnected world?

Clave Pardon the bad pun and the cheesiness of the metaphor, but D&D is just magical, man. It’s the game that started it all. It was created by Gary Gygax, who is the king of the nerds. D&D is the highest achievement level of geekdom.

So it’s D&D for me, particularly because Pathfinder is D&D in its essence.

I want to be clear though that Paizo is a fantastic publisher and has done masterful stuff with the Pathfinder line. I read the books simply for the fun and enjoyment of them. But I’d jump into D&D 5e, then branch out into the world of Golarian. You’ll love both.

Jason Let’s say I have a D&D character I really love and want to cross him/her over into the Pathfinder world. How hard is that to do in terms of adjusting stats, abilities, etc.?

Clave Can I say a few things? Consider these the appendix in the back of the DMG. First, Golarian is awesome, so do nerd out and check out some Pathfinder, even if just to nerd out.

Second, we need to brag on our colleague here a bit: Michael has just about the most comprehensive collection of Pathifnder reviews in the Internet, and his series on getting started with Pathfinder is a big help.

Third, we’ve reviewed nearly all the D&D 5e books. They are wonderful! You really can’t go wrong one way or another.

Finally, D&D gets more attention as it’s so beloved, but there is some strong Pathfinder nerdery out there, the Glass Cannon Podcast, for example.

Jason And, if I remember right, there were whole worlds built out of the game for D&D. Novels and the like seemed plentiful. Is the same true of Pathfinder and its world?

Michael Yes. Paizo has a series of Pathfinder novels. Plus, other companies can produce products for the game as well (using the Open Gaming Licence and the Pathfinder Compatibility Licence) and they have produced their own settings and supplements. 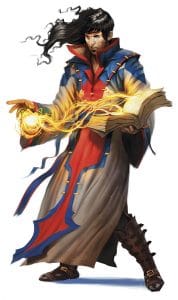 Jason And lastly, what do you think makes the archaic world of warriors and wizards so appealing to us all today? It clearly resonates in our culture.

Michael That’s a good question. There’s something about the idea of being heroes fighting against evil monsters that appeals to people. I guess it helps get you away from the humdrum of everyday life.

Clave Don’t even get me going on why wizards are the best, man. That would be another 100 chats out of me.