In the 1970s, everyone was Kung-Fu fighting. Martial arts were a phenomenon all across America and the comic book industry wanted to capitalize on it, leading Marvel to introduce the character of the Iron Fist.

Danny Rand was the son of a wealthy father who had previously discovered the mystical city of K’un L’un, which only appeared occasionally. On an expedition to find it again, his father’s partner betrayed him, killing him by cutting his mountain climbing line. Danny and his mother then tried to hide, as the partner did it all for jealous love of her; soon she has to sacrifice herself to save Danny from a pack of wolves.

But the people of K’un L’un find the youngster and he begins training becoming a powerful warrior, by dipping his hands in sand and rock, before plunging his hands into the molten heart of a dragon, gaining super powers; the main effect is that he can channel his chi into a powerful punch, usually just once a day.

Iron Fist is one of those characters that never has been able to hold his own title for very long. Even with Chris Claremont writing and John Byrne drawing the title, those two great creators couldn’t make the book sustainable. But that did lead to what Iron Fist is most famous for, as a member of the Heroes for Hire.

Marvel, unsure what to do with the Iron Fist and the blaxploitation inspired Luke Cage aka Power Man decided to combine the two into one title where they worked as superheroes that could be hired for various jobs. That title, Power Man and Iron Fist, had quite a long run and some very interesting stories. Towards the end, it explored the story of Danny having cancer and he dies. But it is comics and he is resurrected.

Currently Rand has reformed Heroes for Hire with Luke Cage, who has begrudgingly agreed to the arrangement and they have their own current book.

And, to be fair, the character of Iron Fist is a bit problematic, which showed itself in the recent casting for his upcoming Netflix character. While the character is clearly a white guy, many were hoping that Marvel might use the opportunity to cast an Asian or Asian American in the titular role. They instead cast someone who looks more like the character has classically, casting the blond haired Finn Jones, who is most well known as a character from the Game of Thrones series.

Ultimately, the Iron Fist will be a part of Marvel’s Netflix universe, joining alongside the characters Luke Cage, Jessica Jones, and Daredevil as a part of the Defenders superteam. 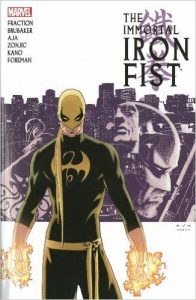 Personally, the Iron Fist is an interesting character that I think more people should pay attention to. While an excellent fighter, his superpower being a big bang that has limited use because of the physical drain it puts on him makes him (and his fights) take on a more epic nature. When will he have to use the “iron fist”?

And the relationship between him and Luke Cage, alongside other characters like Misty Knight and Colleen Wing, who Ross accurately predicted would be a part of the Netflix world.

If you have never read any Iron Fist, then the best place to start is the 2006 Immortal Iron Fist series, written by Matt Fraction and Ed Brubaker in the early part of its run. They are available here as well as the Marvel Unlimited app. Also, the current series Power Man and Iron Fist has a low bar for entry and could be a great place to jump in.

Thanks for reading Nerds on Earth. We appreciate it. If you’ve enjoyed anything on the site, please let us know in the comments or do us a solid and share using the social media button just below.

Review of Marvel’s Iron Fist: Full of Problems or Good…