Thanks to my dedication to you, the loyal audience of Nerds on Earth, as well as a case of pneumonia, I finished season 1 of Marvel’s Iron Fist, the latest show in the Marvel and Netflix connection that is leading to the Defenders team show that will feature characters from Iron Fist, Jessica Jones, Daredevil, and Luke Cage. 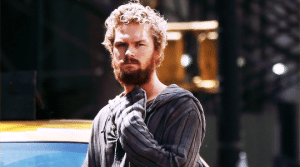 It would be impossible to discuss Iron Fist without mentioning that it was controversial even before production began. The Iron Fist in Marvel Comics is a blond haired, blue eyed character named Danny Rand.

When it was announced that they cast the part that way, some people were really disappointed. They felt it was a chance to create a prominent Asian character in the Marvel movie and television universe and they were frustrated with Iron Fist because Marvel didn’t take that casting opportunity. That is a different debate from whether this show is good or not and I recognize that I am saying that from a point of privilege that others are not afforded.

Early reviews on the show were not good, which led Marvel to send out some casting spoilers and other notes to try and rebound it as it headed into its launch weekend. So, is it good? Bad? Contemptible?

On the whole, this season of Iron Fist is very slow, and while there are some ideas that I like and are worth exploring, this would be the least successful of the Marvel-Netflix shows, with the possible exception being Daredevil season 2. 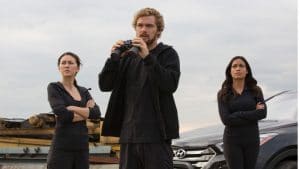 The show deserves some credit for taking on some audacious goals but the truth is that audaciousness is also what hinders it. For instance, the Iron Fist has a storied history, especially recently in Marvel lore and the show addresses that to some degree.

But the hints it offers sort of leaves it all over the place. There are a handful of characters who have a “Well, duh” moment around the reveal of previous Fists and others that could care less because they are still trying to understand who he is. So here are the main plot lines where I will try very hard to be spoiler free but also point out that there was a lot attempted.

Danny Rand, his training and his becoming the Iron Fist. The early part of the season held some hope to me that we might really get to see some interesting backstory but it fizzles on the whole. His calling as the Iron Fist and how he lives into that would be part of that as well.

That whole Iron Fist piece becomes jumbled when the plot starts centering in the idea of chi, which he needs to focus his powers. The show uses some odd special effects around that that never really help to clear it up; mysticism would work to a point but then we have some expositional moments where they try and explain it and it unravels in a mess that feels like they shrugged their shoulders and said “We tried.”

The idea of family. Danny attempts to reunite with childhood friends, making a new family for the one he lost as a child. Additionally, that family has some significant issues. Suffice it to say, while a great deal of the show’s running time deals with this, if there is a message around this plot, it somehow got punched out of the picture. Repeatedly.

The Hand. The Hand is very, very close to becoming the albatross that is going to sink these Netflix shows. In this case, you have to give them a little bit of a pass because it is such a fit in terms of what the Iron Fist’s skills are. But if the Hand plays a prominent role in The Defenders, it will be very, very worrisome.

Is Marvel’s Iron Fist any good at all?

All of that to say, it isn’t a bad show per se. It clocks in at 13 episodes and it feels like you wish mid-production that the creative team had said “We have 10 solid episodes here; let’s just produce that.” Because it is slow, it means it can drag in standard Netflix bingeing. There were a couple moments where I had to ask myself “Am I really still watching?” when the Netflix app gave me the question.

That said, here are some good parts.

First, the fighting scenes are amazing. Other than they tend to take place in dark and moody areas, they are well done, feel honest, and you get a sense of the character’s skills and that they are not invulnerable. None of it felt cheesy or people walking on wires to me. This part of the show deserves praise. 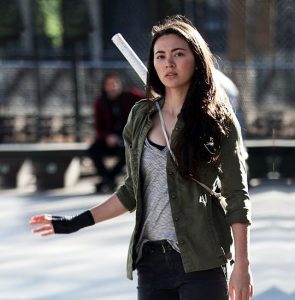 Second, the casting. On the whole, the cast is well put together and meets their needs. While I didn’t care for the Meachum plotline and all the corporate espionage around it, the actors cast as Joy (Jessica Stroup), Ward (Tom Pelphery), and Harold (David Wenham) all do decent work with what they are given.

Likewise, Danny Rand being played by Finn Jones is good. Whereas you wish that he had nailed the part and put all the casting issues to rest, he does good work.

To me, the star and breakout of the show should be Colleen Wing as played by Jessica Henwick. Her work elevated her character, the scenes she was in and–like Misty Knight in Luke Cage–made me think she is the real breakout star. (Listen Marvel, add one episode to the Defenders order and someone put these two in a box episode and get ready to collect some awards.)

It does what it needs to do. Iron Man 2 is roundly criticized as the worst of the MCU films and part of that is because it had to do a lot of work to get what came next: The Avengers. I suspect when the Defenders show drops, this show might be seen in a similar light.

It is also the first show where Marvel clearly listened too much to its successful parts of other shows and tried to cram them into this one. There are 6-7 fights that are clearly attempting to be this season’s breakout Hall Fight ala Daredevil Season 1 and Luke Cage Season 1. There is also a weird hip-hop soundtrack that they tried to wedge in, which I can just see as a studio note after Luke Cage’s successful use of music. It definitely has its flaws.

That said, overall, I’d give Iron Fist season 1 a 6.5 out of 10 Nerds. It is not Marvel’s best work by any means but I don’t think it deserves the criticism that has been heaped upon it either. (Also, in one of these Marvel Netflix shows, I’d like someone to show up at Claire’s apartment, her jump up and be all frazzled with them just saying “Wait, I thought this was Catan night.”)

A video introduction to The Old Guard #1, new from Image Comics

Who said history is boring? Here are 7 historical novels for nerds!