This month proved a bit tricky!  With Jason covering DC’s Rebirth titles, I asked Amanda to steer clear of them when making her selections.  Aside from those, the pickins were mighty slim, so I walked out with yet another Deadpool title and an indie comic I never would have thought to pick up myself. 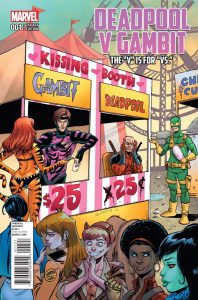 Introduction to the Comic  The story picks up with Gambit and Deadpool recognizing one another while standing in line for coffee (after a pretty decent Jean-Paul Sartre joke from Deadpool…Yeah, who’d a thunk, right?!).  They try and figure out when they’d last crossed paths, and we’re whisked off into a flashback.

In said flashback, Deadpool is posing as Spider-man and Gambit as Daredevil in a staged superhero fight that sprawls over a large urban area and draws an awful lot of attention – including the attention of the real Peter Parker and Matt Murdock who are apparently out on a bit of a man-date.  There isn’t much to the staged fight as neither imposter is using their actual power set, but some of the running commentary they have is decent as they keep stating for their audience that this is just your run-of-the-mill superhero fight, take a jab at the mind control trope that leads to so many of them, and even make a Civil War joke:

Deadpool:  Don’t mind us. Super-hero fight.  Daredevil and I have political differences.

Gambit:  A lot of super-hero fights these days come down to political or philosophical differences.

Eventually its revealed that the fight was really just a cover for a diamond heist that proves successful.  However, their employer plants a gun under the table the titular characters are sitting at, Gambit interprets that as an inevitable double-cross from Deadpool, and the two become embroiled in a fight – a real one this time.

They eventually use their words (seriously: how many disagreements between heroes could be settled with words?) and discover that it was their employer who planted the gun to distract the two of them with a scuffle and make off with the diamonds.

Plot twist!  That same guy finds Deadpool and Gambit in the coffee line and offers them one last big score.

Why should you care?  Maybe you shouldn’t…?  Here’s the thing:  If issue #1 is any indication, this is a goofy Deadpool comic and won’t prove much more.  If that is your preferred Deadpool, then this might well be worth digging into.  Otherwise, I’d pass.  What made the last Deadpool comic noteworthy was its emotion and drama.  I’m not confident you’ll get that from Deadpool v Gambit.

On the other hand, maybe you just love you some Gambit and will buy anything that bears his name and likeness given that he’s not a reoccurring character in any other title currently.  More power to you! 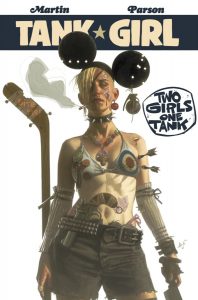 Introduction to the Comic  We open on one Magnolia Jones, an art dealer, whose assistant has found her the next big ticket item:  Tank Girl’s tank.

Then on to Tank Girl somewhere in the Australian wilderness, and she is not happy.  In fact, its important for me to point out that her first page includes an “f-bomb” and a topless woman.  This comic is intended for mature audiences only and earns that rating on almost every page.

Anyway, Tank Girl, her humanoid marsupial husband Booga, and the topless woman (Barney) jump into some backup vehicles and head to Decaf Dave’s to make enough money to buy another tank.

Meanwhile the art dealer gets a wild hair, cosplays as Tank Girl, and takes the tank out for a joy ride.  Her assistant, none the wiser, calls the cops who head off in search of the missing merchandise.

Decaf Dave’s hot tip leads the crew to a small town in which a convoy of trucks will be ripe for the pickens.  Coincidentally, the cops tail Magnolia and the tank to the same small town but are called off at the last second when they’re told its the setting for an army sting…one to catch Tank Girl.

The final panel shows Tank Girl in the backup tank beside Magnolia – her doppleganger – in the real deal.  Surprise!

Why should you care?  Its been a while since I watched the Tank Girl movie (1995), but the one thing I do recall from it was its absolute zaniness and character.  Those two things definitely shine through in the comic.  It is colorful in more than one sense of the word.

Apart from that, unless you’ve got some roots in the Tank Girl world, I don’t know that there’s much here for you.  Or at least I can say there wasn’t much here for me.

Can’t blame Amanda for trying!  When I robbed her of the Rebirth titles, her faced literally dropped.  She was looking forward to the challenge of picking only two from that lot for me!  Aw, well.  There’s always next month and who knows what it will hold?