By Michael Adkins On May 31, 2016 Last updated May 31, 2016
Share TwitterReddItPinterestFacebookEmailPrint 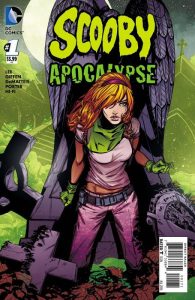 Introduction to the Comic  At the start of the comic, the gang as we know it doesn’t exist as a whole. Daphne and Fred are trying to revive their show “Daphne Blake’s Mysterious Mysteries” and find themselves at Blazing Man festival after receiving a hot tip from an anonymous informant.  The informant, Velma, works for a secret government agency.  She’s a bigwig and Shaggy works under her as a dog trainer for “smart dogs.”  Among said smart dogs: The titular Scooby Doo.

Shaggy has snuck Scoob out of the lab and the duo are scouring the festival in search of some munchies.  Scooby can talk, but he’s also given a pair of emotigoogles which give him projected eyebrows (for a greater range of expression) and the ability to project images like emojis.  But the googles are also able to pick up “field emanations” from Velma’s glasses, and what he sees is her being attacked by a jumpy Fred who mistook her for a mole person.

Scooby goes on the defensive before Velma is able to calm him down.  The gang, now together, heads underground into the facility where Velma proceeds to tell them that they’ve been working on more than smart dogs.  A group of scientists has developed nanites intended to “weed out man’s baser instincts…providing the biological template for a more abundant and peaceful world.”

Of course the nanites have already been deployed, but they are lying dormant for now.  But that doesn’t last long as an alarm buzzes and Velma discovers the nanites have come online.  Scooby and the gang are the only people on earth safe from them underground.  The rest of the world…Well, you’ll have to read to find out! 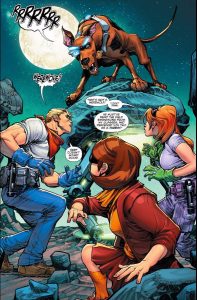 Why should you care?  I have to admit that I was pretty skeptical about a Scooby Doo comic, but this has me intrigued.  I sat down to this comic thinking I would be treated to the show of old that I’m so familiar with.  Not so.  So very much not so.

But that isn’t necessarily a bad thing.  This comic is very weird, and that is what makes it stand out.  A big thing it will have going for it as it develops:  The gang isn’t cohesive.  They’ll be learning one another instead of being that gelled, chummy gang of teens we grew up with.  Their togetherness is not assumed, and it has some major hurdles to overcome if I’m reading this right.

And the issue changes the formula up a bit.  There’s a bit of mystery for sure (Who activated the nanites?), but I can guarantee that the gang won’t be unmasking any fraudulent monsters anytime soon.

But there I’ve gone and said too much… 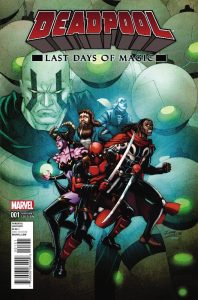 introduction to the Comic  Deadpool arrives on scene where the magical Mike Hawthorne was clearly on the cusp of a big reveal to his girlfriend’s (Daphne) parents and whisks him away.  He explains that there are some “magic-eating monsters” attacking Shiklah’s (that’s Deadpool’s wife; Nightcrawler officiated) monster metropolis.

Also arriving on scene are Doctor Voodoo and the ghost of Ben Franklin (no joke).  Voodoo explains that the enemy, the Empirikul, devours magic and that they’ve already consumed the Sorcerer Supremes of several other dimensions.  And sure enough – the Empirikul call in what they refer to as a Spell-Eater which is a machine that absorbs magic.

The inhabitants of the monster metropolis are doomed unless it can be stopped.  To this point, Hawthorne’s spells have fallen flat, but he temporarily leaves the scene to retrieve a book of spells called Togbon’s Journal from which he casts a magical barrier of some kind.  The trouble is that he has to remain in its center with the Spell-Eater in order to save the rest of the cast.

Hawthorns asks Deadpool to tell Daphne that he loves her before dying right before his eyes.  And Deadpool is wrecked by this.  And what’s more:  Deadpool doesn’t even know who Daphne is…He tracks her down and gives her the news, but I don’t want to completely spoil that scene here.  Just trust me when I say I’ve read a ton of Deadpool stuff and I’ve never seen the drama and emotion brought like this in any of his other titles.

Why should you care?  I get that Deadpool is an oversaturated character and he’s very polarizing in the comics community (you love him or you hate him).  Heck, I had to convince the other Nerds that I didn’t pick this up on my own!  Amanda gave it to me of her own free will, and she has no idea which characters I like or don’t like.

But I will say two quick things about this issue: 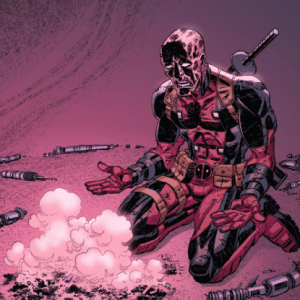 1.  I’ve not read much of Marvel’s magic-centric material, so seeing it in action was kinda cool.  That said, I don’t have much of a point of comparison for how good that element is or is not when held up against the likes of, say, a Doctor Strange book.  Although I’m pretty sure you can count on the Sorcerer Supreme finding his way into this run before long.

2.  Seeing Deadpool emote as he did was stellar.  It is so, so well done.  It wasn’t just him sitting dumbstruck at the point of Hawthorne’s death, it was the whole scene with Daphne that closed the book.  If the creative team can replicate genuine moments like that with a character who is too often written as a full-on clown, I’ll stay tuned.