With the Doctor Strange movie filming, it’s about time we point out that magic isn’t real. I mean, ‘c’mon, do they really expect us to believe that a mustachioed man wearing a cape and an amulet is to be taken seriously?

Well, we should, because magic is serious business, as it is part of the foundation of so many of the stories that us nerds love.

So back to the Doctor Strange movie: how will Marvel introduce magic into the Marvel Universe?

There are two basic overarching types of magic that are presented in genre fiction, explicable and inexplicable. But will Marvel choose explicable or inexplicable magic? Well, to answer that question, we’ll need to explain the terms.

Inexplicable Magic doesn’t particularly attempt to make sense or explain itself. Instead, inexplicable magic is more dream like, bordering on feeling like randomness or a really wild mushroom trip.

A lot of non-Western creation myths a folklore has the qualities of inexplicable magic. Folklore from many parts of Africa, India, or greater Asia is known for it’s trippy stories that often defy any sort of logic, but often are densely packed with moral lessons and allegory.

Fables are powerful. This is why Asian inspired Wuxia is so popular, as is the Uagadou school of magic  in the Harry Potter universe.

On the other hand, Explicable Magic has a structure and rules to make itself understood. In a way, explicable magic is something akin to science in the sense that it endeavors to obey some amount of internal and external logic.

I get it. You are secretly laughing at me because I dare to make the ludicrous claim that magic of all things is logical.

But think of it this way: How would you react if a vampire suddenly shot rainbow lasers from his eyes or transformed and flew around as a swarm of barn owls? Well, you’d be confused, because barn owl flight tricks and rainbow eye lasers are not the generally accepted magical abilities of a vampire, even if it would be amazing if they were.

To have a vampire break the rules of magic in that way would break your suspension of disbelief and you would demand an explanation from the storyteller. See, there are rules to magic!

Of course, I would be OK if the Vampire had a magical amulet. We understand that magical amulets give people powers they don’t already have. That’s how magical amulets work. (Hang on, as you can tell I’m setting up the Eye of Agamotto, the Cloak of Levitation, and the Book of the Vishanti.)

Explicable magic doesn’t mean you don’t do “Strange” things. It should still be magic, after all. There is an expectation for clever and creative uses of spells in stories that follow a structure of explicable magic.

Think of Dungeons and Dragons with 40 years full of spell descriptions that clearly outline the diameter and damage of fireball spell, as well as the spoken and material components required for a wizard to cast the spell. But in addition the rules in the Player’s Handbook there are creative descriptions and clever uses that are unleashed when players sit down to roleplay, which give it a second layer of magical. 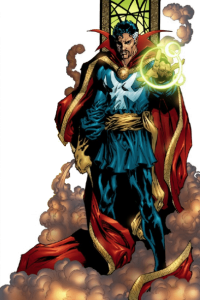 All this requires the rules of magic to be knowable and consistent. We simply must know how magic works, as playing well with others demands it, whether it be in contact with Tony Stark and his technology and science framework or the Agents of SHIELD, who are dealing with Inhumans.

It might not seem like it but the entirely make-believe, fakey, completely fictional Marvel Universe has rules. There is a way we expect it work. There are rules to these things!

Therefore, the magic that Doctor Strange uses must be explicable, even if the character and comic has long held a really trip vibe that is a holdover from its 1970s LSD-influenced beginnings.

So then the question becomes, how exactly will Marvel do it? Well, there will be the aforementioned amulet and there will most certainly be spell books present in the film (as there will be a guaranteed skeptical character who claims that magic is nonsense). 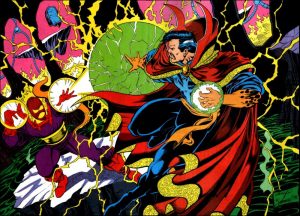 Marvel has introduced future tech in Iron Man, human evolutionary changes in SHIELD, genetic engineering in Captain America, mythology in Thor, and aliens in Avengers. In short, they’ve run the gamut in ways to introduce the fantastical, and they’ve created clear rules in each of those occasions.

They’ll do the same with the introduction of magic in Doctor Strange. And I, for one, can’t wait to see what the rules are.