From the end of last season, we have all been preparing for and waiting for what we were promised: the Secret Warriors! How did they do and what happened this week in Agents of SHIELD episode 317: The Team?

A Recap of Agents of SHIELD Episode 317: The Team

Last week, we were left with Coulson and the rest of the team being stuck in their plane, having been taken down by the wannabe Magneto. What we discover this week is that while the plane is on the ground, they are working to fight and hold off Hydra and the Hive. 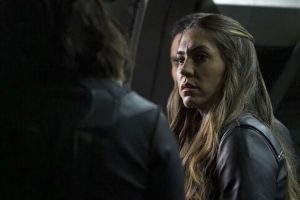 Daisy and Lincoln have activated the Secret Warriors and we get to see the return of Yo-Yo and Joey. Clearly, they are not sure that they are ready for the main stage but they know they have work to do.

When they finally arrive at Hydra’s base, they break into teams and take on the agents, even splitting up into duos and eventually down to 1:1. Lincoln manages to capture Malick and they are taking him with them. In the fight, to save Lincoln from the weird Colombian guy who can freeze people with a look, Joey hits the bad guy with a pipe, killing him. And because this is what you do, they keep the body to examine.

Malick isn’t talking. They use a variety of techniques on him, with him ultimately reveals to Coulson that one of the Inhumans has been turned into an agent of Hive. Coulson quietly has the base locked down, which prompts the steady stream of suspicions, from Daisy, from the other Inhumans, from May, who is in her hospital bed and so on.

Eventually, we wind up in an incident, as the Inhumans don’t want to go to containment, so the 4 of them quarantine themselves off.

Meanwhile, Simmons and Fitz have been examining the body of Captain Sunglasses because his body’s temperature is oddly not going down. In their unexpectedly graphic autopsy, they discover some kind of parasite that had entered his brain, likely giving Hive some form of control, or at least influence on him. With that in mind, they get very serious about figuring out who is infected.

They are helped by Daisy, who leads all the Inhumans into one of the white stasis chambers. In the midst of feeling betrayed, there is a discussion, an argument and–because they discover some relic in Lincoln’s locker–they decide it is him. And we all buy it until…the reveal is made that Daisy is the infected one. (Lincoln deserves some respect from the team at this point and I hope he gets it.) 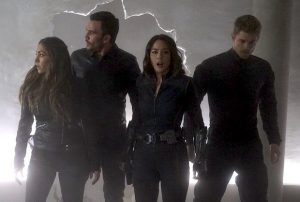 Through a flashback, we see that she was infected by Ward/Hive when she was in the base and has since then been doing his bidding. She had killed Malick, set up an explosion that nearly killed Fitz and Simmons and framed Lincoln. They all realize it when she does her hacker voodoo on the security system and is shaking apart the base on her way out.

A Review of Agents of SHIELD Episode 317: The Team

So, here is the deal: I have no idea what I think about this shocking revelation. Part of me is very apathetic and, while I like Daisy and how she has progressed over these almost 3 full seasons, it didn’t elicit a massive emotional response to me.

Which isn’t to said I am dead on the inside. Proof?

Watching Joey come to terms with his killing of a bad guy was real. He wants to live into what his powers have potentially called him to, to be a hero. But what that means is so foreign and strange to him that he doesn’t want to be that long term. (Plus, Joey is the best comedy of the show; something about him and his character gives the show some great comedic beats).

Yo-Yo and Mack. When we first see Yo-Yo, she is working on her English and you don’t think much of it. Until she uses the words she was studying on Mack, who has clearly been working on his Spanish. It made me as giddy as a schoolgirl. Seriously, I really like the potential of this relationship.

FitzSimmons. They have another alone moment and Fitz is essentially given the “full steam ahead sailor” all clear from Simmons. Which made me tweet that if they Whedon one or both of them at the end of the season, I am going to be so sad.

A 7 out of 10. Clearly, it advanced the plot forward in some significant ways and had some good moments. But not a great episode.