Stop me if you’ve heard this one. In the beginning there was Kintu. Although Kintu was the only person on earth, he was not alone. Kintu lived with his cow, as one does.

But up in the heavens lived Ggulu with his many children, who occasionally came down to earth to play. Once upon a time, Ggulu’s daughter Nambi encountered Kintu and his cow in Uganda. Nambi was instantly taken with Kintu and decided to stay and marry him.

This, my friends, is an Ugandan creation myth, telling the story of how Kintu became the father of all people. But as the story continued, misery was introduced as Nambi’s brother, Walumbe, was not pleased. Insisting on going to earth with Nambi, Walumbe instead fell to earth and his presence cause nothing but suffering and conflicts.

Oh, and there was some wizardry involved, of course, which brings me to my point. JK Rowlings just keeps dropping wonderful gifts upon the world, her latest being to introduce new schools of wizardry around the world. One of those schools – Uagadou – is located in Uganda. From the Pottermore website:

[Wag-a-doo] The largest of all wizarding schools, it welcomes students from all over the enormous continent. The only address ever given is ‘Mountains of the Moon’; visitors speak of a stunning edifice carved out of the mountainside and shrouded in mist, so that it sometimes appears simply to float in mid-air. Much (some would say all) magic originated in Africa, and Uagadou graduates are especially well versed in Astronomy, Alchemy and Self-Transfiguration.

Well, since we have some Ugandan wizards in training, let’s take a few minutes to explore some of the African folklore and legends that could serve as rich and exciting source material to add to the Potterverse.

Rompo Inspired by what may have been sightings of old world porcupines, the rompo is a mythological beast that romps through legends in Zimbabwe, South Africa, and Congo, as well as Uganda. A precious little thing, a rompo has the head of a hare. Oh yeah, it also has arms like a badger, legs like a bear, a skeletal torso, and human ears.

A picky eater, a rompo only dines on human corpses and it is said to softly hum as it eats. I can imagine fantastical stories of the time when wizarding students of Uagadou would run afoul of this beast. 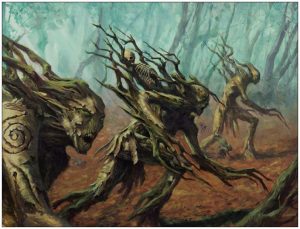 Kakua Zambezi Would you believe me if I said there was an ancient tome entitled The Magic Art and the Evolution of Kings, Volume II that contained a thorough taxonomy of the relics of tree worship and the origin of perpetual fires?

If you would believe that such a tome exists, then you’d surely understand the presence of the Kakua Zambezi, the ancient dryads who dwell in the forest of Uganda. You would also be able to imagine how these tall, slender dryads (who smell vaguely of incense) would make for fascinating forest allies (or foes) of the wizarding students.

But what if a Mizimu is haunting the wizarding school of Uagadou, a potential locale for books situated in the Potterverse? You’d bet I’d read that book.

Balubaale These grand guardian saints were great men who protected their tribe even after death. Seen almost as semi-deities, the Balubaale were thought to play a central role in the day-today affairs affecting ancient Uganda.

Could it be that a certain wizarding school had ancient protectors who helped to influence present events at the school? Or maybe they are just the hall monitor, I don’t know. But it’s easy to imagine how this piece of Ugandan folklore could be reimagined for modern stories in the Potterverse.

Having traveled to neighboring regions, I’ve been fortunate to witness the rich history of the people of Africa. Whereas Americans too often settle for Bigfoot and Kamala, The Ugandan Giant as our cultural folklore, the people of Uganda have a fascinating and varied collection of myth and legend like the witches who cause climate change or those listed above.

I like my fantasy genre to pull from history and folklore, as real life stories can make for excellent fiction. Now let’s hope JK Rowlings gifts us with some stories centered in Uagadou, as I can imagine it’s one heck of a school for wizards.

Get a great deal on Harry Potter: The Complete Collection.

Some Monsters and Scary Ghosts to Spread Some Christmas…

What We’re Reading at Nerds on Earth: A Glance at our…