You know that kid who never had to study for anything because everything just came naturally to her?

In D&D 5e a sorcerer is an innate spell caster. They don’t have to hit the books like a wizard does, nor do they have to lean on the gods like a cleric would. Instead, being a bada@@ just comes naturally to her.

Bacarella Morgentall never had it easy due to her half-orc heritage. Abandoned young and left to fend for herself on city streets, Bacarella proved resourceful, even to the point of drawing the attention of Zhentarim, who were more than happy to procure the services a precocious young cut purse mercenary.

But things changed when Bacarella was a young teenager and had found a secluded alleyway for a little kissy face neckin’ with a half-orc lad. Well, things started to heat up, in ways both expected and in ways that were entirely foreign to Bacarella.

As she felt a gust of air burst forth out of her body, her suitor was blasted into the the air, and Bacarella watched in horror as a lightning bolt crackled downward to fry the lad.

In shock, Bacarella couldn’t fully understand what had happened, yet she new somehow that the stormy end to their stormy passion was somehow her fault, having been produced innately from within her.

Panicked and heartbroken, she fled to the only other faces she was familiar with: The Zhentarim. Years later, Bacarella is fully in control of her sorcerous power. In fact, the pain of its origin remains a source of focus for her power. 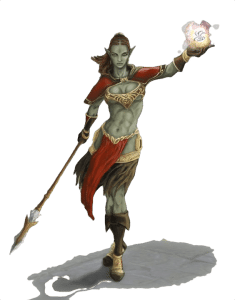 Unlike wizards and clerics, the magic of a D&D 5e sorcerer comes from within them. It’s a latent power that is just waiting to be unleashed.

But while they are powerful, they aren’t stout, using a d6 for their hit dice, meaning sorcerers are pretty squishy. But coming from a life on the street, Bacarella learned quickly how to handle a dagger, which still comes in handy in a pinch.

Sorcerers use their charisma score as the modifier for their spells, which makes sense when you imagine the power comes from within them. Then has they reach higher levels more sorcery points are gained, which allow for more flexibility in spell casting.

At 3rd level they gain Metamagic. This allows a sorcerer to twist spells in interesting ways such as protecting allies from spell effects, playing with the range of spells, or adding more damage to spells. Again, flexibility.

The Sword Coast Adventurers Guide added a Storm Sorcery origin and that allows the inmate magic to come from the power of elemental air. As a result, I imagine Bacarella to be the half-orc fusion of Rogue and Storm from the X-men. Take one part tragic origin and another part weather witch to get yourself one 6th level D&D character.

The Storm Sorcery origin adds some fun elements to the character. At 1st level she was able to avoid attacks by flying up into the air using an elemental gust.

At 6th level she gained resistance to lighting and thunder damage (which would’ve come in handy for her fated beau). At 6th level she also gains the Storm Guide feature which allows her to subtly control the weather around her.

This is all in addition to the great sorcerer list of spells. Sorcerers are cool.

As a half-orc, Bacarella has several race bonuses like a +1 to constitution and a +2 to strength. The half-orc’s menacing nature makes them intimidating and half-orcs gain a savage attack on a crit. It’s hardly flavor that you’d expect in a sorcerer, but hey, who is to say will be innate touched with elemental power.

Finally, Bacarella’s background is that of a Zhentarim Faction Agent. This gives her safe haven within the secret network of the Zhents.

A sorcerer is a fun class in the 5e rules of D&D. And the added Storm Sorcerer origin from the Sword Coast Adventurers Guide was a needed and welcome addition.

Sorcerers aren’t necessarily easy to play, as they are low on hit points and hanging your sorcery points is tricky until you get the hang of it. And I didn’t do Bacarella any favors by squeezing a half-orc into a spell caster’s robes, but it’s important to have fun with D&D and experiment with different character builds.

Besides, I’d be frightened of a half-orc weather witch, wouldn’t you?

You can give the new D&D Players Handbook a look here. And here is the Sword Coast Adventurers Guide that adds new player options.