First, we all need some color in our lives. Comic Alliance released a four part study combining color theory and superheroes that was pretty darn interesting. Covering primary colors, secondary colors, light vs. dark colors, and even the possible significance of transparency (like the Invisible Woman or Wasp’s wings) and exposed skin, author Brian McLachlan explores what meaning colors carry and how their combination on our favorite costumes reveal something about the person wearing them.

McLachlan is upfront about outliers and even the reason why most of our heroes’ getups incorporate red, yellow, and blue (ie along with black, they were the easiest colors to render way back then), but a) its still fun to apply some conjecture and b) we’d be naive to think that colors weren’t selected a bit more intentionally later in the game. You can read all four parts here, and we have no idea if that’s a nod to the early four color printing of comics.

2.  Bringing the Fun Park to The Walking Dead.

Universal Studios opened up a Walking Dead-themed exhibit, with a little help from The Saviors. Take a look:

3.  The North American School of Wizardry.

Attention muggles, Harry Potter fans can now learn more about the fabled North American school of wizardry. Check it out on Pottermore.

Here is a guy who built head-mounted flamethrowers to mimic Cyclop’s eye blasts. This might be a bad idea:

Who are we not to participate in Shark Week? While this might not make the cut for our new series on ICONIC Comic Book Panels, it certainly is bad@@.

Here is a picture of Misty Knight punching a shark in the face: 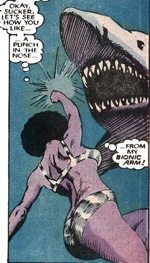 We’ll see you next Friday for five more nerd culture links. Until then, feel free to share a highlight in the comments if we missed something.

The X-Men and Mister Sinister: What is so Sinister About Genetic Manipulation?