Nerd Culture Highlights for the Week of January 29, 2017

2.  THIS HERE is a fantastic idea and unbelievable deal from Dark Horse comics.

Basically they are making a trade consisting solely of #1 titles and selling it for $6. 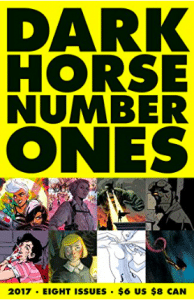 I’m unsure based on the article from iFanboy if this is going to be a regular thing, but I love it already.  Here’s what you’ll get in the 200+ page, full color book come its release March 29:

We now have lead role casting for both Runaways and Cloak and Dagger.  This brings us one step closer to both franchises debuting and we seriously can’t wait.

4.  The Starfinder Core Rulebook is available for preorder!

We Nerds are super excited for Starfinder.  I say “we,” but like 98% of that “we” is really Clave – and that’s saying something since the rest of us are absolutely stoked.  Clave is already calling it his new obsession and it hasn’t even released yet.

5.  In honor of the Big Game (no, not Mass Effect: Andromeda), here’s a funny video showing that nerds and jocks might not be so different after all.

A little NSFW (they swear twice).

Shadows of the Empire: The Star Wars Movie That Wasn’t

Surprised by Lemony Snicket’s A Series of Unfortunate Events