Nerd Culture Highlights for the Week of January 22, 2017

1.  You probably visualize the Final Trench Run on the Death Star ALL WRONG.

This post by Todd Vaziri isn’t written as an “umm…actually” kind of post, but it could totally prepare you to be that guy or girl.  Vaziri walks you through the common mistake and the canonical cues that set the record straight.  Everything seems so obvious upon a minute’s thought, but Vaziri doesn’t call us dummies; instead he even provides a few shots from the movie that actually prime us to make the error.

On Wednesday we were treated/teased with the following from Marvel on Twitter: 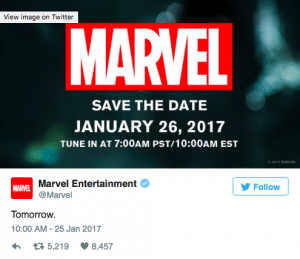 Yesterday, the big reveal was a coloration with Square Enix, Crystal Dynamics, and Eidos on an Avenger’s video game!  Slightly anticlimactic, but we’ll take it.

3.  Magneto is not realizing his power’s full potential…because science.

I love the Because Science w/ Kyle Hill videos from Nerdist on Youtube.  I’m cheating a little since this one is technically from last week (the one from this week is called “What’s Inside the Infinity Stones?” and is also interesting), but gosh would I read some comics where Magneto flexes any of these additional powers that, to my knowledge, he’s not utilized thus far.

Jay and Miles are always ragging on the crazy things magnetism can apparently do in the comics, but those silly stretches are nothing compared to the scary and scientifically plausible powers that are Magneto’s true untapped potential!

4.  This Wyrmwood GM Screen currently on Kickstarter is smart and sexy.

It is modular, magnetic, and pretty darn innovative with components like a two-way dice tower and a rotational panel.  Their stuff can be pricey, but it comes with an unconditional lifetime guarantee.  That’s tough to beat! That means this could be the last DM/GM screen you’ll ever buy.  I buy my backpacks from Goruck for that exact reason, although my packs see much more wear and tear than my screen ever will!

It should begin streaming on PAX’s Twitch channel.  Jason, Clave, and I watched the last live session from PAX West in the theaters way back in 2016 and thoroughly enjoyed ourselves.   The gang is back tomorrow with DM Chris Perkins and should not be missed by any Dungeons and Dragons fans.  Don’t fret if you can’t watch it live; they usually pop up on Youtube not long after the convention is over!