Adkins Clave, Jason and I had press passes to watch Acquisitions Inc. live in the theaters Sunday night. Now Clave did his best to catch Jason and I up on the history of AI, but Jason and I watched the event as complete newbies to the campaign. However, that gave us unique perspectives on what we were watching. So for this week’s chat, Jason and I are going to share our first impressions of Acquisitions Inc.

Jason I admit it. There was a part of me that was very worried that I was jumping into a story in the middle and would be utterly lost.

Adkins Yeah, Clave tried to give us the 2 minute history on our way to the theater, and not to knock on his retelling, but thankfully they had a pretty snazzy animated intro to the whole deal. 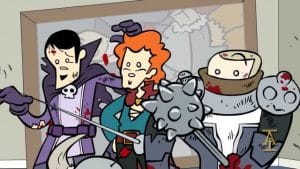 Jason They clearly spent a little money on the animated introduction and I would say it was money well spent. In the way that a good television show gives you a “Previously on…”, they were able to lay out a story and give me just enough to invest from the get go.

That made it feel more like I missed a chapter or story of a book and not a book or three of a series. Really smart, especially since this was the first time they had ever broadcast it to theaters. (Previous episodes are on YouTube.)

Adkins That’s a spot-on simile: Missing a chapter instead of a book. So much of what we’re growing to love has a humongous backlog of content that we sometimes feel obligated to catch up completely on. That can be overwhelming and ultimately deterring. The animated intro did a bang-up job of solving that problem, for sure.

Editor’s Note: You can watch the animated intro on Youtube here.

Jason On top of that, I was unsure about watching other people play Dungeons and Dragons. But I have to say, I had a thoroughly enjoyable time.

Adkins Let’s touch on that briefly; the “watching other people play DnD” bit. How did Acquisitions Inc hold our attention without inviting us to the table?

Jason There is a combination of things that they do really well. First, the players are entertainers. None of them is a world class stand-up comic but they are all funny. And that always makes any D&D game enjoyable.

The second thing they did was how it was all shot. They used multiple cameras and that allowed us to see simultaneously with the players what their rolls were. When the audience is cheering and groaning based on the critical hits and misses, you know you are on to something.

When did you feel like they had you hooked in?

Adkins I’m working on refining my DM chops, and so I spent a lot of time in panels with that aim in mind. The one thing I kept hearing over and over is that everything should be designed with the players’ fun/enjoyment in mind. Getting to see an expert work within the rules without being married to them was enlightening.

I mean, if ever there was a DM that could have been a rules lawyer, its Chris Perkins. He writes this stuff! But I only recall him making mention of any rules/mechanics twice and in both cases he used them to facilitate what the players wanted to do, not prevent them.

Jason There is no doubt that Chris Perkins, who was DMing the game, is one of the best. His role in creating story for Dungeons and Dragons is a great fit for him. In watching him work, behind an admittedly weird dragon mask that was distracting at times, he did what more DMs should let players do: be heroes! 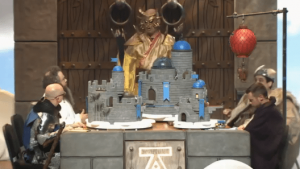 Adkins The set piece, too, was incredible! It was so much fun watching the PCs see it for the first time showcase awe. They’d clearly not seen it before the session, and that added to the sense of excitement.

When Perkins removed the top of that one tower and they all lean in with expressions of amazement, it was a shared experience across all viewers.

Jason Yeah. I don’t know what the budget was, but creating that three piece structure in the clouds that could be used in different ways was pretty amazing. Especially when they removed the top part for the climatic fight, it was pretty amazing to see with the angle they were able to give us with an overhead camera. I am sure it would have been entertaining with simpler fare, but it definitely ratcheted up the showmanship.

Adkins Another thing that struck me about the show: Even though it was riddled with combat, they didn’t roll initiative until, like, 2.5 hours into the session. Perkins did a great job of passing the baton around amongst the PCs without a single dice roll. It’s definitely got me thinking…

Jason Agreed. And it felt like a natural flow to what they were doing.

That definitely helped it flow as a story and feel less like a choppy mess of game mechanics. Good tip for lots of DMs out there.

So, was there a favorite moment for you in the story? 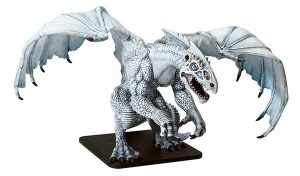 Adkins I’m a fan of the Hail Mary play, man, and these guys pulled some pretty wicked stunts off. Viari (Rothfuss) getting thrown between the two towers and tricking the white dragon into thinking the bad guys were shooting arrows at him were so much fun, but my favorite moment had to be when Jim Darkmagic (Krahulik) used his Benign Transposition spell to trade places with Viari when he fell into the pit and into the clouds. That was pure genius!

Jason Yeah. Those were definitely two moves where you saw players thinking and working through how to make an impact. The Rothfuss arrow shenanigans worked beautifully; that is how you shift a battle without doing serious damage: you change the context.

And the spell cast at the end was perfect team work. Guy makes a risk, fails, potentially falling to his death and his wizard partner saves him. It made me excited about the party I play with and how we will get tighter as a team and better as our levels and skills increase.

Adkins And shouldn’t that be the goal of any and all actual play media: Showing newbies how much fun can be had and providing unspoken tips on how to play better to veterans? This thing had some wide appeal IMO.

Jason Agreed. There were probably 30(ish) people in the theater we saw it at and it was broadcast at many more through Fathom Events. I was surprised that our crowd seemed older than I would have thought but the audience was pretty engaged from the beginning.

And as part of the ticket, everyone got a module. Have you looked at that much yet?

Adkins Yeah. I’ll be writing a review of it up for NoE in the next week or two, so keep an eye out for that!

The inside of the book says it could serve as a solid adventure hook to the newest campaign, Storm 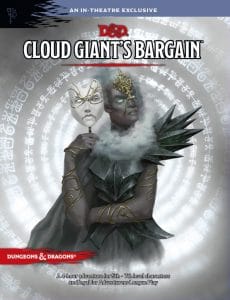 King’s Thunder, so if you’re thinking about running that campaign and missed out on the theater and the module, you might be able to find one on ebay (we saw them for sale as soon as we left the theater).

Jason And I bet they will release the book in a digital format for wider circulation pretty soon. They spent too much on the aesthetics of it for it to just be for the movie showing.
On the whole, it was a good night, which says something when you consider we left DragonCon to go. But it was definitely enjoyable and I went and marked up the older stuff on YouTube to watch.

Adkins As did I.

And if you missed PAX West and the Fathom Event, you can watch the entire session here! Happy viewing!