Nerds on Earth has 12 contributing writers and over half of us spent Labor Day weekend in Atlanta, GA, at Dragon*Con. Something about birds of a feather, right?

On Friday morning, four of us (Jason, Clave, Turff, and myself) decided to throw some d20s around together and signed up for a non-campaign adventure session of Dungeons and Dragons. Our adventure was “The Genie Playground,” a custom 4 hour session designed and DM’d by Leigh Shull.

While the four of us have DnD experience, it isn’t required. Heck, we didn’t even need our own character sheets as Leigh had several of his own ready to go. We could have shown up empty handed and none-the-wiser and we’d have still been able to plug in and play, which is fantastic!

Leigh immediately parted the veil of reality and our PCs awoke to find themselves in a strange place with no memory of how they arrived. We navigated a seven room dungeon with about as many combat encounters in three hours, with a few puzzley elements to boot.

Plus my Way of the Sun Soul monk mounted Turff’s PC when he polymorphed into a brown bear with the aid of a discovered magical item and we rode into combat.

All of that fun could be had with absolutely no preparation on our end.  Register to play ($3-$4/person for four hours), show up, pick a pre-generated character, borrow a set of the DMs dice (or a friend’s), and have fun! If you already love Dungeons and Dragons or if you’re curious and want to give it a try, we absolutely recommend you take advantage of this offering at Dragon*Con 2017 or take a peek to see if your convention of choice has organized play. Most cons do.

Word to the wise: Preregister online for any tabletop session you’d like to try! You can buy tickets on site, but they go super fast. We loved our experience with Leigh so much that we checked the boards to see if we could get in on another session (even a second with Leigh!), but alas…they were all booked solid.

Clave and I rolled up our own characters for this adventure and brought them to the table in on our iPads. That was phenomenal. Access to spell/ability descriptions at our fingertips, the ability to hurt or heal our characters with a few taps on the screen (no erasing and re-writing), easily able to track resources (like ki in my case); just to name a couple of the perks.

It was love at first experience. In fact, Clave and I found ourselves rolling up characters for funsies with the app in the downtime before panels began. It takes almost no time to do so and requires zero source books to pull off (though you should absolutely own a PHB at minimum!).

We’ll be posting more extensively on Hero Lab sometime in the future on Nerds on Earth, but if you want to start rolling up PCs for your DnD 5e adventure now, you’ll need to download this community pack to make it happen.

We loved our experience playing DnD so much that we thought, “Hey, is there a convention that is this…but all the time?”

Yes. Yes there is. 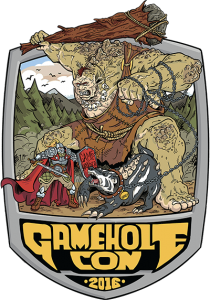 And there are a ton of gaming options ranging from tabletop RPGs to board games to card games. The most difficult part of Gamehole Con is going to be choosing from among the nearly 1200 options!

I’m confident that Nerds on Earth will have a Dragon*Con 2017 presence regardless. At minimum, Jennifer and Morgan will likely still haunt the host hotels disguised as any number of awesome characters from several mediums. Who knows? Perhaps we’ll put on a panel ourselves!