Both seasons of Luke Cage on Netflix have had incredible acting. It starts with the smooth, easy delivery of Mike Colter who plays Luke Cage, then adds other fine actors to chew up scenes around him.

One such actor is Mustafa Shakir, who plays Bushmaster, an intense, ferocious, and charismatic Maggia crime family boss from Jamaica. But that’s on the Netflix show. What about Bushmaster from the comics? 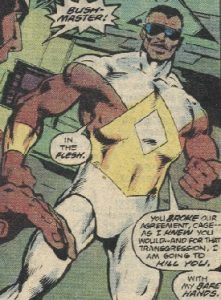 Well–as with everything comics–it’s confusing, as there are two Bushmasters. One Bushmaster is a member of the Serpent Society, while the other–John McIver–is the villainous Bushmaster from Netflix’s Luke Cage season 2.

John McIver first appeared back in 1977, and was created by X-Men legend Chris Claremont and John Byrne for use in the Iron Fist comic, but then appeared in several issues of Power Man.

John McIver was portrayed as a savvy teenager and an excellent street-level fighter who rose in the Maggia (what Marvel calls the mafia) ranks along with his brother Quincy (who would go on to become the other Bushmaster). John McIver scrapped with Iron Fist, Misty Knight, Claire Temple, and Luke Cage, the who’s who of the Netflix show. 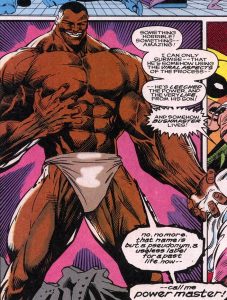 In the old school Power Man comics, John “Bushmaster” McIver arranged to be a participant in the same experimental process that Luke Cage went through, making him just as damage resistant as the hero. But as Luke Cage and Bushmaster duked it out at Seagate Prison, Bushmaster was doused with an extra does of the chemicals, then electrocuted by a downed power line.

Bushmaster was transformed again, this time becoming an “unliving metal” and taking the name Power Master. Unable to reverse the process he eventually found himself unable to move and his body crumbled, leaving just a metal skeleton. Aren’t comics fun?

So that’s the comic version. Stop reading if you haven’t watched Luke Cage season 2, as I’m fixing to compare / contrast Bushmaster’s appearance in the show.

First, Bushmaster appearance on Netflix drips with influences from the comics. Here I’m talking about broad strokes. Organized crime and strong family ties were very much a part of Bushmaster’s comic story, and that’s how it is on Netflix.

Second, all the secondary characters are fully recognizable. Bushmaster wasn’t just a Luke Cage foe in the comics, he matched wits with Misty Knight and others as well. This is the same on the show, which does a wonderful job of fleshing out characters like Misty Knight, Colleen Wing, and Claire Temple. They give them a twist for television but they are clearly inspired by the comics.

It goes even deeper: Shades and Comanche are from the comics as well! On the show, they work for Black Mariah, but they worked for Bushmaster in the old school Power Man comics.

How he got his powers was different. He submitted himself to the same experimentation Luke Cage underwent in the comics. But nightshade–a rare plant with mysterious properties–was used on the show.

But even as the source was different, there was a nice parallel between how each of the means ended up contributing to his demise. Too many chemicals in the comics eventually turned him into “unliving metal,” while too much nightshade on the show contorted to him risk his sanity.

Bravo and well done, I say. In my opinion Bushmaster was excellently cast on the television show. And the writers also did a bang-up job of taking an old school comic book character and spinning him with a fresh story. I now want more Bushmaster, both from comics and from television!