In this series of posts, we have been looking at comic properties that could be turned into the next hit television series, in the way that Image Comic’s series The Walking Dead has become one of the hit shows on all of television over the last 5 years.  And already, we have looked at these series:

And all of these series are completed tales and are much different than our next nominee: Greg Rucka’s Lazarus.

The comic series Lazarus is hard to define.  It is focuses on Forever Carlyle, a Lazarus for the Carlyle family, one of the few families that rule the world in a not-so-near, yet not-so-distant future.  The world is a place where governments have been replaced by corporations who are in turn run by these families.  The world has shifted down into a darker place, where the rich are very rich and the poor are literally called serfs and trash.

Part of what makes the series interesting is that dynamic: Rucka has created a dystopian world that would be fascinating to discover and he has done it by not making unrealistic conjectures but by following the directions are world is headed.  (His work in creating and telling the backstory in the letters columns and additional material in each issue are just as much fun to read as the stories themselves.) 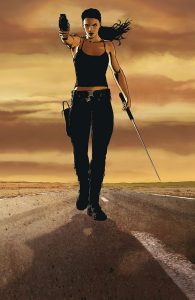 In the midst of that each family has a Lazarus, a position that is part bodyguard, part intelligence officer, part genetically modified warrior who is unquestioningly loyal to their family.  Forever is bred genetically and has many gifts, including the ability to heal and recover, even from the point of death, or at least near death. Here’s our full review of Lazarus.
Here is why this series (which only has 13 issues so far) could be the next great comic to television success story.

The comic series Lazarus would be a risky bet for television.  It isn’t a finished story.  It has a large world that is interesting but it would need a focus and because it lacks the long laid out plot, maybe it isn’t the best bet right now.  But it also could be the best and strongest female led story since Buffy the Vampire Slayer show was on television and that makes it an intriguing possibility as a show to move from the panels of comics to the other entertainment screens.

Fox’s The Passage Proves to be Smarter than at First…