I have to say that this mid-season finale of The Walking Dead really snuck up on me.  I was unprepared for it to be here so quickly and it made me wonder how some of the loose ends would get wrapped up this week.  After last week’s episode where the band started putting it all back together to head towards a mid-season showdown with the Grady Hospital crew, this week’s episode – Coda – is where everything goes down.

As always, spoilers ahead.

The episode opens on Lamson, the cop who knocked Sasha unconcious last episode and I have to say, for a man with his hands ziptied behind his back, he is making pretty good time. However, Rick is on his trail, first on foot and then in a patrol car. After a couple polite requests for Lamson to stop, Rick impolitely runs into him with the car. Lamson is naturally really hurt. After they banter some, Rick then summarily executes Lamson and tells his corpse to shut up.

Gabriel is then shown hopping along, coming to the school, discovering Bob’s barbequed foot there.  When the zombies break out of the school, Gabriel hauls tail back to the church, where he is locked out.  Despite the deep irony of potentially letting him die there that way, Michonne and Carl let him back in, where Michonne uses the katana well.  But they are quickly overrun.  Gabriel leads them back to the office, and then holds the door so Carl and Michonne can leave.  As he goes to run, a zombie falls and impales herself on the machete he used to pry up the floorboards and make his escape passage.  They then lock the zombies inside the church.

Rick and Daryl are then huddling, talking about what to do now that they are down a cop.  They concoct a plan saying that Lamson was killed by what Team Grady calls “rotters” and they both are willing to play along.  It seems like this is their only option, unless it’s to go in guns blazing.

Back at the hospital. Dawn is getting in some cardio on a sweet recumbent bike, while trying to get anyone to respond to her on the radio. Beth is cleaning up and points out the picture of Captain Hansen, her mentor that we learn she ultimately had to betray. Dawn then talks about how you don’t need the love of the people she leads, she just needs their respect, for now and for the moments when she needs them to have her back, or else everyone and everything goes down.

Gabriel explains he had to see the school for himself.  (I think this one little line does much to put Gabriel in a better context and I will explain why later.)  As they watch the walkers prepare to bust out of the church, along comes Team DC, who park the firetruck, blocking in the walkers.  They then all share what they know, from Eugene being a fraud, to Beth being alive at Grady.  They then all suit up to go help with the rescue of Carol and Beth in the hospital.

Beth then watches as Officer O’Donnell pushes around the old man who helped her previously.  He is about to call on her as well when Dawn says that she needs Beth’s help. Next, it’s Beth sitting at the edge of the elevator shaft, possibly thinking about jumping to her death.  When Dawn tries to state the current state of things are only temporary, Beth gives her a quick, sudden and harsh reality check: the world is never going to get better.  This is all that it is.  Dawn asserts that Beth owes her several times over for favors, when Officer O’Donnell shows back up and accuses Dawn of cracking just like her mentor Hanson did.  After some banter about how Dawn is going to protect the weak, O’Donnell attacks her.  It’s clear that her hard work on the recumbent bike has paid off,  and she eventually sets up Beth to push O’Donnell down the elevator shaft. 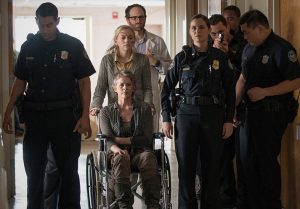 Later, Beth is in Carol’s hospital room and accuses Dawn of not trying to help others but simply using what she has to protect herself. Beth thinks that everyone in the hospital just uses people to get what they want.  Beth then says that she will get out, just like Noah did, when Dawn says that he will be back because eventually, everyone has come back.

Sasha and Tyrese talk about their past and how they both have hesitated in a moment.  Tyrese confesses to not having finished Martin when he had the chance, who Sasha later had to kill.  After a sibling moment, Sasha thinks that while Tyrese may be a good, loving man, she isn’t sure about herself anymore.  Below them, Rick is negotiating to meet with Dawn and make the prisoner exchange when Sasha quietly snipers a zombie nearby, disrupting the cops Rick was talking to.

Inside the hospital, they are going to meet up in a corridor to make the exchange. They all holster their weapons. The captured officers hold to the story of Lamson being eaten by zombies when they are swapped and Dawn says some words about Lamson.  As they settle on a prisoner for prisoner swap, all seems well with the world as they are about to part ways… 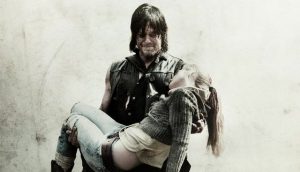 When Dawn suddenly says that Noah has to stay with them.  This infuriates Rick, who feels like she is going back on a deal.  They argue some and Noah is willing to back to let the others go free.  Dawn then says “I knew you’d be back” and that triggers something in Beth.  She goes back to hug Noah and then suddenly pulls some scissors she stashed in her cast earlier and stabs Dawn.  Dawn then draws and kills Beth with a shot to the head.  A heartbroken Daryl quickly shots and kills Dawn.  And in what looks like it may turn into a modern OK Corral stops when the formerly captive woman cop talks everyone down; there will be no more retaliation and Daryl weeps.  They offer the group the chance to stay in the hospital but they decline and as they exit the building, Maggie arrives just in time to see her dead sister being carried out in the arms of Daryl.

This episode is a solid 8 out of 8 Nerds.