Do you enjoy a good board game? Great! Do you like to laugh? Perfect! Do you enjoy the company of others and doing the first two things at the same time? Well then, do I have a game for you, Wise and Otherwise.

Wise and Otherwise is a party game for groups of 2-6 players, where the first person to bluff their way to 20 points, wins. The game is produced and published by Wiseandotherwise Inc. and has no accredited designer, artist, or creator.

Similar to party game hall-of-famers Balderdash and The Dictionary Game, Wise and Otherwise incorporates strategy, wit, and the art of the bluff to gain points (through votes from your opponents and correct guesses of your own) to win.

In game, the players determine the Reader at random (which rotates round by round for the remainder of the game). The Reader selects and reads a game card for that round, which has the first half of a specific phrase or saying. The primary mechanic of the game, which differentiates itself from Balderdash for instance, is that the phrase/saying is a local or native saying from the country that accompanies it on the card. The players are then tasked with coming up with the second half of the saying.

Once all of the players are finished writing, the cards are handed to the reader and the players vote for the phrase or saying which they think is the correct one. Players receive points for votes from their opponents and for guessing the correct phrase. This is the best part (and characteristic) of the game for me, your will laugh your face off! The phrases people come up with are the fodder for historic inside jokes and countless hours of merriment with friends and family. I have laughed the most in my life while playing this game! 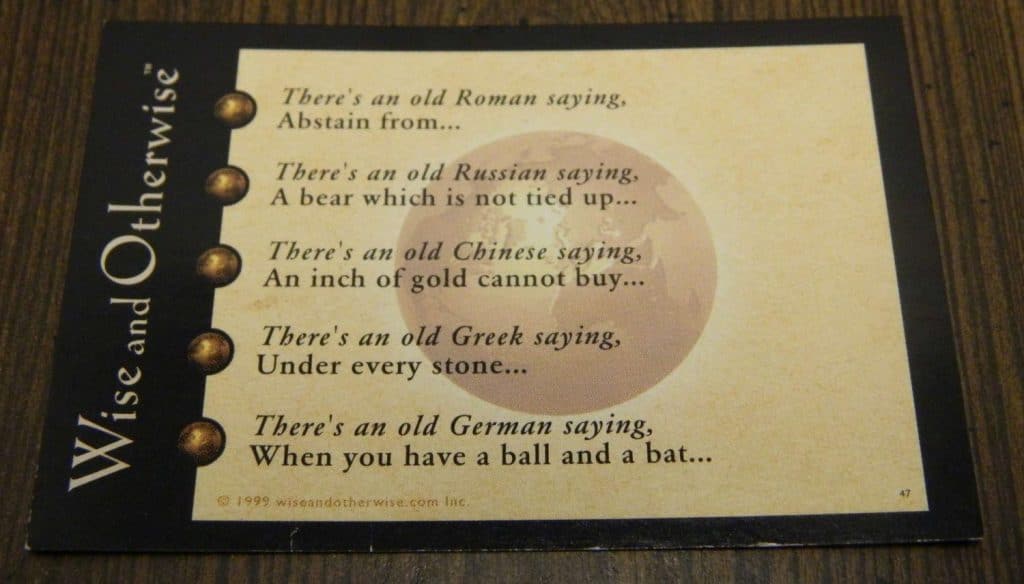 Wise and Otherwise: Why it’s Worth Your Time

Laughter. I don’t think I can hit this point home anymore than this, it is simply the most fun, most laughter, and best time I have had playing a board game in my life. By nature I am very competitive, and more often than naught you will find me playing board games where the goal is to destroy people. But Wise and Otherwise ranks near the top for me because it is just so much stinking fun!

Anyone can play. It’s concept, instruction, and game play are brutally simple. All you have to do is think and try to be funny. If you’re in the market for a board game that has mass appeal across many different demographics, then this is the game for you.

Did I mention it is hilarious? Seriously, you will laugh a crap ton playing this game! Just play it already.

Wise and Otherwise: Why You Might Want To Move On

Your experience depends on who you play with. What I think I am trying to say is that if you play with lame people, then it will be a lame game. Like so many party games, your experience is primarily dependent on the people you play it with and not on the strength of the game itself. The concept and mechanic of Wise and Otherwise are strong, but you’re still stuck with your playmates sitting in the driver seat of your experience. Be sure to have at least a couple funny, creative, or silly people in your group to hit home the laughs. If you don’t, well then, better luck next time.

It’s a little too simple. When I first played (and then quickly purchased) Wise and Otherwise, I was confident that I had just acquired a board game that I would be playing for the next ten years. Then reality set in after a dozen or so games; I was loosing interest. Don’t get me wrong, Wise and Otherwise is one of my favorite party games, but it’s simplicity can erode the foundation of your playing experience over time, and like me, your passion for the game can wane. Someone much wiser than me said “played it once, played it.”

Wise and Otherwise is a terrific party game that incorporates the personalities of the people playing it with simple strategy and easy game play. If you are looking for a game that yields laughter at every turn and aren’t looking something that is to heavy, then Wise and Otherwise is perhaps the perfect game for you. You can get it here.

The 7 Best Christmas Movies for Nerds