Some of my favorite childhood memories are of the hours spent around the dining room table. Under low light with plenty M&Ms and laughs, we played board games.

Though my game tastes have expanded and my play palate has broadened, I still find respect for the classics and a deep love for simple board games. I want to introduce you to one of my favorites.

Bohnanza is a card-trading game for 2-7 players built upon the notion that relationship and strategy run hand in hand. Designed by board game designer legend Uwe Rosenberg, the game was originally released in German in 1997 by Amigo Spiele games, and then in English by Rio Grande. (Read more about the influence of European board games.)

In game, you take on the role of a bean farmer who’s goal is to plant and grow bean fields that earn you gold. You are forced to negotiate open trades with other farmers because your stock of beans is determined at random by the deck. In order to cash in a crop, your bean field has to reach a certain size. For that particular type of bean to be sold for the highest amount, you have to trade for additional beans.

There are 7 types of beans (cards) in the deck, each with a varying number and worth determined by their scarcity.

Review of Bohnanza: Why it’s Worth Your Time

Although the game is simple in its design and premise, when the bartering starts it yields a crop of laughs and enjoyment that far out weigh it’s simplicity. I can recall countless inside jokes (and family drama for that matter) that sprouted from a bean trade.

Both sides of my family are known for their competiveness when it comes to board gaming, but the gloves always stay on in Bohnanza. If you enjoy the conversation around a board game more than the competition, this is your game. 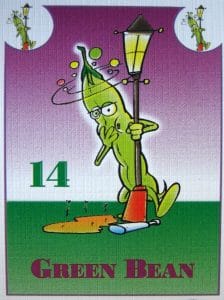 Bohnanza also boasts an easy uptake, taking only a few minutes to learn. The hardest part of introducing someone new to Bohnanza is wrapping his or her mind around the question “tell me why I am a bean farmer again?”

I also enjoy that anyone can play, and enjoy, Bohnanza. From youngsters to grandparents, this game has a broad reach across age demographics, making it a perfect family game.

Another appeal, if you know the German language, is the play-on-word bean illustrations on each of the cards. A great example is the green bean, which in German is pronounced Brechbohnen (Brechen means to break). Any warm-blooded German knows that a proper green bean is “broken” from it’s stock. The pun is that Brechen also means “to vomit”, which explains the vomiting green bean illustration on the card. Even the games name is a play on words. Bohnanza is a combination of Bohn (bean in German) and our English Bonanza.

Review of Bohnanza: Why You Might Want To Move On 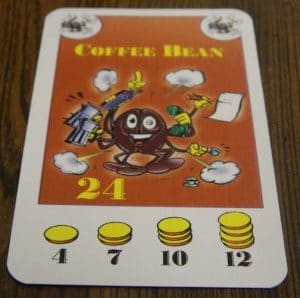 Perhaps the greatest strength of Bohnanza is it’s simplicity, but for many it is also it’s greatest weakness. The game design doesn’t allow for expansion, relying heavily on it’s “what you see is what you get” draw. There is a growing family of spin-off games and subsets, but the premise remains largely the same. If you are a tabletop gamer who values complex strategy and vastly expandable platforms, then I would recommend another trip to your Amazon shopping cart.

For what Bohnanza lacks in design depth and complexity, it greatly makes up for in it’s quirky, light-hearted fun. It’s a board game that everyone can enjoy and families can sit down together around the dinner table for hours playing. It’s a game that has brought me countless memories and cherished laughs. It will do the same for you!

You can purchase it here.

Review of Wise and Otherwise: The Game Where the Beginning…