Throughout J.R.R. Tolkien’s sprawling masterwork The Silmarillion there are an ungodly amount of names, dates, battles, and locations to learn and remember. It’s like a history textbook in that way. And, like actual human history, there are a few names that rise above the rest in terms of their influence and importance. In this installment of The Silmarillion, Nerdsplained, we’ll take a look at the one figure who, perhaps, stands above all the others, except maybe Melkor. That’s right, it’s time to talk about Feanor.

In our post on the Elves, we mentioned that they were divided up into some very broad categories, and that the main one of these were Elves who had seen the light of the Trees of Valinor, and those who had not. Of the ones who did see the light (the Calaquendi), there were three great families – the Vanyar, led by Ingwe; the Noldor, led by Finwe; and the Teleri, led by Elwe and Olwe. 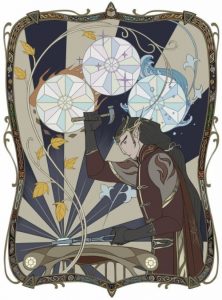 The word ‘Noldor’ in Tolkien’s invented Elvish languages translates as “Deep Elves.” It’s interesting to me that Tolkien never really defines what he means by term. I sort of interpret it as “deep” in the sense that whatever they put their minds to, they took it to the greatest degree possible. And no single elf embodies that more than Feanor, son of Finwe.

Feanor was Finwe’s only child by his first wife Miriel Serinde. The book says that when Feanor was born, he drew so much of her life energy that she grew weary and departed the world. Feanor was most beloved of all of Finwe’s children, because he reminded Finwe of Miriel. The Silmarillion also says of Feanor,

“For Feanor was made the mightiest in all parts of body and mind: in valour, in endurance, in beauty, in understanding, in skill, in strength and subtlety alike: of all the Children of Ilúvatar, and a bright flame was in him.“

So basically Feanor was the greatest, most talented, most accomplished, bravest, most gifted, and most handsome elf that ever lived. And that is saying A LOT…

Why is Feanor so important?

Well, let’s start with a partial list of his creations, shall we?

That’s not a bad resume! Unfortunately, it seems like for every amazing thing he did, he also had a royal screw up of some sort or another. For instance…

There are others, but the biggie is the oath that he and his sons swore. It is not much of an exaggeration to say that every bit of the conflict and war that took place in between that oath and the War of Wrath was related to that terrible oath.

Feanor is like a case study in how being the best at basically everything all the time can be much more of a negative than a positive. He is the ultimate lesson in Tolkien’s creation about how great skill and ability must also be tempered with wisdom, compassion, and humility. And, in that sense, I think Feanor is a fantastic lesson for these contentious times we live in.