In a previous Silmarillion post, we talked about the great houses of Elves and some of their notables. Given J.R.R. Tolkien’s (basically) biased bent towards humanity as Illuvatar’s favorites, it follows naturally that there is also a tremendous lineage of mankind and its heroes in The Silmarillion. There is, and we’ll cover the houses of Men very quickly, but then we’re going to move onto mankind’s greatest figure in The Silmarillion, the man Hurin.

The Great Houses of Men

Mankind was the second race created by Illuvatar himself, and they are called the Secondborn (Atani in Quenya, and Edain in Sindarin) by the Elves. Men first awoke far to the east in Hildorien. When the sun rose for the first time, many of them began wandering westward (towards the sun, actually… Apparently things work differently in Middle Earth) and eventually came to the land of Beleriand, where the Elves dwelled. There is textual evidence in The Silmarillion that the dark lord Morgoth came to the young race and incited them to worship him instead of Illuvatar, and that many complied.

Those that didn’t, and who came into the west, were divided into three main houses. The first to enter into the Elves dominion was the House of Beor. The second was the House of Haladin. The third house was led by Marach, and later his descendant Hador, and is known by both of those names. This third house became the greatest, and out of it came Hurin, the greatest Man of the First Age.

Hurin, The Greatest Man of the First Age

In many ways, Hurin is described as the human version of Feanor – fair-faced, golden-haired, strong-bodied, with a fiery mood. He was a mighty warrior, once chasing and slaughtering Orcs back to their holes after the death of his father, with “a fire in him that made the sword hot in his hand.” On another occasion he fought in a battle with a union of men and elves, and the union lost. Hurin and his brother, Huor, made a last stand to allow Turgon, and Elven king of the Noldor, to escape. Huor and all of the men with them were killed, but Hurin fought on until his battle axe broke, and he was buried under a small mountain of slain orcs and trolls.

His life, ultimately, was a sad one. During the battle where Hurin ended up buried in slain enemies, he was captured by the chief Balrog, Gothmog. He was then chained (or trapped in an enchanted chair of some sort…) to the peaks of Thangorodrim, the mountains guarding Morgoth’s fortress Angband. He was chained there for 28 years and then released. And it’s during those 28 years that things really got terrible for Hurin, because he could see and hear what was happening with his family, but only what Morgoth wanted him to see. And it was awful…

The Children of Hurin

Hurin’s children were named Turin and Nienor, and their lives were like the worst Greek tragedy you can imagine. (Fun fact: it is actually based on a Finnish tragedy. Tolkien was very culturally competent…) It’s a long story. So long that, to date, The Children of Hurin is the only complete tale from Tolkien’s legendarium to be published as a standalone book.

If you’re a casual reader, I know this will sound incredible, but here’s the short version, in bullet point format: 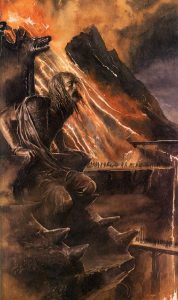 Yep. Don’t forget – during all of this drama with Turin and Nienor, Hurin was alive and forced to watch all of the horrible things his children went through. He left Thangorodrim a grizzled, grim, hopeless man, though still formidable in a fight.

He returned to his homeland, only to find that the entire house of Hador had been killed, driven off, or enslaved.

He returned to Gondolin and cried out to Turgon, whose life he had saved 28 years before, for shelter. But he found the gates of Gondolin closed to him, and all he succeeded in doing was alerting Morgoth to Gondolin’s location.

He traveled to Nargothrond, site of so much grief for his children, and killed the dwarf who had taken up residence there. He took the dragon’s treasure to Doriath and sarcastically gave it to Thingol as a fee for taking “good care” of his family, thus passing on the dragon’s curse to that kingdom.

And eventually, after some kind words from Thingol’s wife Melian, Hurin’s grief- and anger-clouded mind was cleared, and he saw that all the deeds of his life had only served to aid Morgoth. In despair, he cast himself into the sea and drowned. Thus ended the long, sad life of Hurin.

It’s easy to overlook Hurin and focus on his children, but let’s do a quick rundown of the major events that he was a part of, even if only indirectly: