So far in this series on The Silmarillion, we’ve mentioned the Two Trees, or the Trees of Valinor, several times. In many ways, the Trees are at the very heart of everything that happens in the First Age of Middle Earth. So for this edition, let’s take a closer look at these Trees themselves, and why they were such a big deal to J.R.R. Tolkien. 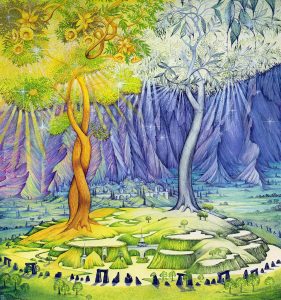 The Trees of Valinor were Telperion the Silver, which shone with a silver light from its leaves, and Laurelin the Gold, whose green leaves were trimmed with gold. The dew from each tree was a source of both water and light to the Valar and the Elves in Valinor.

Each tree waxed and waned in brightness in a 7-hour cycle with one hour of overlap at each end of the cycle, thus giving Valinor a 12-hour day. Other than the stars, which Varda created from dew from the Trees, this was the only light that existed in Middle Earth.

Telperion and Laurelin were sung into existence by Yavanna, the Vala in charge of realizing Illuvatar’s vision for plants and animals. The saplings were watered by the tears of Nienna, the Vala who weeps for others out of grief and pity. Foreshadowing alert!

The Trees are Powerful

Outside of the light they provide to Valinor, and their apparent beauty, the Trees don’t seem to have any inherent powers. Apparently, though, this is more than enough to make them the center of the First Age. For instance, when the Valar learn that the Elves have awakened and try to get them to come to Valinor, they only meet with success after they bring a delegation of Elves to see the Trees. Those three elves convinced a huge portion of the others to start the journey to Valinor based almost exclusively on their description of the Trees. Furthermore, the Elves are ultimately broken down into two classifications – those who have seen the light of the Trees, and those who haven’t.

Also, the Trees of Valinor and their descendants seem to be inextricably linked to the fate of Middle Earth even after their destruction at the hands of Ungoliant and Melkor. Ar Pharazon, the wicked king of Numenor in the Second Age, did many abhorrent things. But his worst action, and the one that seems to have most angered the Valar, was destroying Nimloth, a descendant of Telperion.

As another example, after the line of kings failed in Gondor and the Stewards took over, the White Tree of Gondor was no longer tended and eventually died. This more or less directly coincided with the decline and weakening of Gondor. After Sauron was defeated and the One Ring destroyed, the newly crowned King Aragorn found a sapling of the tree, signaling the rebirth of Gondor and its new golden age.

It’s no secret that Tolkien was a devout Catholic. The Christian faith is replete with imagery and symbolism surrounding both trees and light. In almost every case, these are symbols of God’s presence and activity in the physical world. Here are some examples:

After the destruction of the Trees of Valinor, their light (i.e. the Divine Presence) was only preserved in the Silmarils. So all of the conflict surrounding control of the Silmarils is not just about their beauty – the conflict is symbolic of possessing and controlling the power of God on earth. (Picture how the Holy Grail or the Ark of the Covenant are portrayed in movies.) ((Indiana Jones movies, specifically…))

For all these reasons, it’s not hard to see why Tolkien placed such an immense emphasis on these trees. For him, they were a constant reminder of Divine presence and providence in Middle Earth. The light from the Trees puts the entire history of the Elves into motion, and sets the stage for basically every bit of conflict in the First Age.