At the office where I work, we host once a month Game Nights where we all bring games to play and have some fun as an office. This past month, we played several great games that deserve your attention.

Tsuro: The Game of the Path by Calliope Games. Tsuro is a fun, quick multiplayer game that revolves around placement of your players and path squares on a board. Each square has a different set of paths but they are all designed to always connect in some way.

It moves quickly and is a good game of logic and fun. Definitely recommend this one. 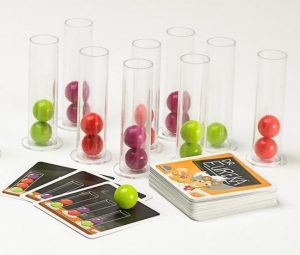 the office. The basic premise is that each player has three test tubes and within the test tubes are two green balls, two red balls and two purple balls. At the start of the round, a card is flipped and the first person to match the design of the different colored balls in different tubes wins.

But, you can’t ever drop a ball and they have to always be in a tube; you can’t just remove one to the table and replace it later. This makes the game a great challenge of both logic and dexterity. Logically, you have to work out how to move the balls around to match the pattern and it takes a fair amount of dexterity to do it quickly.

Doctor Eureka is definitely a fun crowd game to both play and watch; given the nature of the tasks, it would be an excellent game to play with older elementary school aged kids as well! 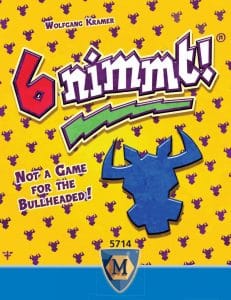 6 Nimmt by Mayfair Games. Card games are generally a big hit with our crowd and 6 Nimmt was no exception. The rules are slightly complicated to get but once you do, it is fairly simple to play. This game was great because the whole crowd could play.

The goal is to discard numbered cards into rows without being the sixth card in a line; if you are the sixth card, then you claim the row and have points that you don’t want at the end. One unique aspect of the play is that everyone makes their next play simultaneously, which means there is a bit of luck, skill, and anticipation in determining if you can manage to avoid being in that last spot.

Definitely a fun game that moves quickly through ten hands with the gameplay of everyone revealing at once. 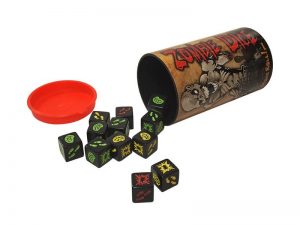 craze with a head-to-head format that makes players decide to play it safe or to press their luck. At the beginning of each turn, a player pulls three dice and rolls them.

Some of the six sided dice are more forgiving, likely to give you a do-over or a prized brains icon. Some other colored dice are less so and give you the dreaded shotgun blast. As you roll, you collect brains. You can continue adding in new dice so you are always rolling three. However, at three shotgun blasts, you are out – losing all points from that turn.

It moves quickly and is a fun 3-4 person game. It definitely was a great side game while others were playing other games.

So, there are four different types of games that are all worth checking out. Of them:

Sidereal Confluence: A Board Game for Deep Play Enthusiasts