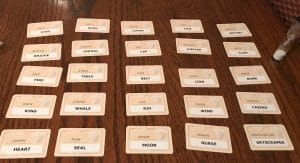 One of the things that I like to find in a board game is a playability that works on a variety of levels. This dynamic can mean across the ages or talent levels or even how well the players know each other.

Good games can usually hit a couple of sweet spots. Great games will work across even more levels. Codenames by Czech Games is a great game.

The game is designed for 4-8 players and can work with players as young as 6 years old. The basic premise of the game is that the two teams are looking at a 5 x 5 grid of words. One player on each team is the Spymaster, giving clues that their teammates can then use to guess words. 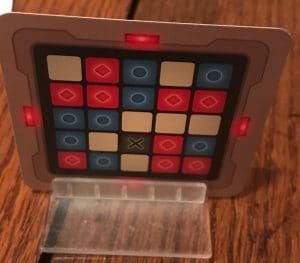 Each team has specific words indicated by their color that they want to collect as there is a pattern on the grid that will give them a win, that you discover on whichever Key Card is chosen. The other team also has a pattern that they are trying to match on the same card. This system means that each team is playing against their own pattern.

But there is also a word that is claimed will cost the team the game immediately, named the Assassin card.

The added challenge is that the Spymaster can push the limits by offering clues that might relate to multiple words, so when they give their clue, they also give a number of cards that they think fit the clue. The team then discusses, debates and then starts trying to pick their words. If the team gets a word that fits their color, they gain that card. If they hit one of the open spots, they end their turn, covering that word with an Innocent Bystander card. If they hit one of their opponents cards, their opponents gain the card and the guessing team loses their turn. The first team to get their color cards revealed, wins unless a team stumbles into the assassin. 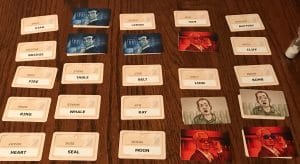 The dynamic around wordplay and guesses is quite competitive and a game moves quickly, with most matches ending in 15 minutes or less.

So what makes this a great game?

For all these reasons, Codenames is a great game and worth checking out. It also is a very affordable game, as you can pick it up from $15-20 at your local game shop or on Amazon.com.

If you are looking for a fun, easy to learn game for your next gathering, Codenames is a great choice and a game that has lots and lots of repeated fun out of the standard decks and clues the game provides.

Jesus and the Game of Life: Using Board Games to Get to Heaven