By Clave Jones On May 4, 2017 Last updated May 3, 2017
Share TwitterReddItPinterestFacebookEmailPrint

I realized we should be thrilled to live in this instance of the Multiverse where artists like Jim Lee and Rob Liefeld were so heralded in the early 90s that they were given places of importance over writers. Well, it was thrilling to see the sales of 90s comic books in this universe, if nothing else. 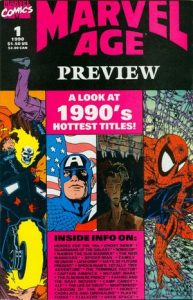 Yet I feel like a temporally displaced wayfarer, sucked out of my lovely home universe and thrust into this one, left with a nagging sensation that somehow things in this instance of the Multiverse are just a little bit off.

Let me explain: You’re familiar with comics, right? Some universe exists for every possible outcome of every possible event, so there is presumably a universe where Chris Claremont stayed on as writer of the X-Men and was not forced out by then editor Bob Harras in the early 90s. In that universe, Chris Claremont was allowed to bring his binders full of ideas to fruition instead of artists like Rob Liefeld abruptly taking over more of the plotting duties of the comic stories.

Alas, the Multiverse is a cruel place and we never got to read the planned–yet never written–Chris Claremont stories like Mutant Wars. But we sure can spare a nostalgic thought for what could have been!

Mutant Wars is a biggie in terms of untold comic book stories. This wasn’t just some loose idea scribbled on a white board. Mutant Wars had already gone fully formed to marketing and was solicited in 1990’s Marvel Age Preview #1. Here is that marketing text:

“Mutant against mutant, faction against faction, each trying to be the strongest – the survivors. The lines have already been drawn and the mutants in the Marvel Universe have formed their allegiances: The Hellfire Club, Apocalypse’s forces, the re-formed X-Men, X-Factor, The Marauders, The New Mutants, and Legion, controlled by the Shadow King.”

The marketing hype continued: “The first salvo in the Mutant Wars will cross from X-Men to New Mutants to Excalibur to X-Factor for three months this fall. The action will run in a tight continuity from each issue to the next. Only the four mutant titles will be directly involved. The heroes will try to stop the other mutants from splitting into warring factions. But for most, survival is the issue, even if it means sacrificing fellow mutants.”

And it concluded in this way: “Before we reach The Mutant Wars, we have to answer some key questions and resolve some major storylines. The new X-Men team will have to be established, and the world will have to learn that they are still alive. Once begun, The Mutant Wars will continue to affect the lives of every mutant in the Marvel Universe for years to come. It will be the most important event in the mutant milieu since the death of Phoenix. Follow it in X-Men #267-269, New Mutants #95-97, Excalibur #28-30, and X-Factor #60-62.”

Bread crumbs were being dropped in actual published comics as well. For example, in 1989’s New Mutants #75, writer Louise Simonson dropped a hint to the coming Mutant Wars crossover. Hellfire Club members Sebastian Shaw and Magneto debated the future of mutantkind, with Shaw mentioning various mutant factions and Magneto predicting a war between those factions.

Nuggets like this were being sprinkled throughout Marvel comics. Yet…

The early 90s are looked back as one of the most contentious eras in comics. Comics had spent a decade being driven by writers, yet the emergence of some talented young artists were shifting the focus from the writing to the art. And this shift was happening FAST.

Despite Chris Claremont penning what is universally acknowledged as a legendary run on a single comic, new marvel editor Bob Harras was going all in on artists driving the stories. Case in point, Jim Lee’s name was placed in front of Chris Claremont’s on marketing posters during this time. Meanwhile, artist Rob Liefeld had already pushed out Louise Simonson as the writer of New Mutants.

The result was that Chris Claremont ultimately left the Uncanny X-Men at issue #279 even though he had plotted it until issue #300, and his vision for Mutant Wars was abruptly reimagined as the X-Tinction Agenda.

The Mutant Wars became the X-Men crossover that never happened.

The boom created by artist driven storylines quickly resulted in a bust where Marvel Comics had to declare bankruptcy. It turns out that writers are important to comics if you want the storylines to be, you know, comprehensible. And us long time comic readers are left wondering if The Mutant Wars was actually a metaphor for editorial wars.