By Michael Adkins On May 5, 2017 Last updated Jan 11, 2021
Image by Jeroným Pelikovský from Pixabay
Share TwitterReddItPinterestFacebookEmailPrint

Paizo’s Bestiary 6 is chock full of creatures big and small (but mostly big and scary and death-deal-y).  One of the neatest elements of this volume in the series is the inclusion of a whole range of creatures directly inspired by real world mythos, religion, and superstition.

Some are obvious (like the Horsemen of the Apocalypse from the Christian tradition), while others sneak in under the radar because:

If you spent some time Googling the names or categories of the baddies listed in any Bestiary, odds are you’ll find some real world equivalent for many and can load up on lore–possibly giving you ideas on how to roleplay some of these creatures and how to frame entire adventures around them.

And that is a driving force behind Bestiary 6: Campaign generation.

As I pointed out in the review, many of the beasts in this book aren’t going to be housed in any Adventure Path anytime soon. Sure, you’re free to drop them in, but why not go all thematic on your PCs and create your own AP?

Pathfinder Bestiary 6: See You In Hell

For instance, there is a whole lot of fodder for a stroll through one or more of the nine levels of Hell in 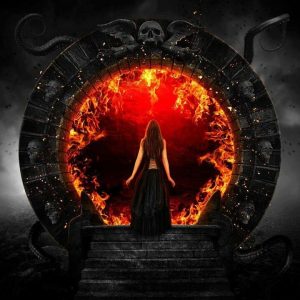 Bestiary 6. But who or what would you encounter?  When? And, perhaps most importantly:  Why and how?

Well, you could solely rely upon CR (challenge rating) to sort that out, but that would only provide surface level reasons for who, what, and when.  Useful, yes, but incomplete as far as story is concerned, and whether you’re building out a one-off trip to Hell or a full-on survey of its many levels, the why and how (the story) is going to matter to your PCs. “Because it’s in the script” isn’t good enough!

So let’s talk about the why and how of some of these infernal Hell-dwellers (assuming you’ve already taken care of explaining how your party found themselves in Hell to begin with!).

Pathfinder Bestiary 6: From the Mindless to Minions to Masters

The various levels of Hell ought to be populated by some mindless creatures that are the “wild animal” equivalents of that realm. Low CR, perhaps, but not necessarily so. You can fill these spots out with creatures that can be found in Any Terrain or most of the Planar terrains (so I think you can borrow from, say, the Ethereal Plane to populate Hell, but stick to the evil-aligned Planes unless you’ve got good reason).

These creatures will be the source for the majority of your encounters. They are going to feel more like a part of the environment than the reason your PCs find themselves there or how they believe they can get out.

Now we can start getting specific.  Demons and daemons might reasonably be the logical creatures at this level. Perhaps a little disambiguation is necessary here: 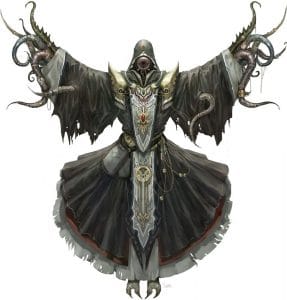 Demons are CE (chaotic evil) aligned. They’re bad always and can never be trusted. However, because your PCs won’t necessarily know that what they’re dealing with is a Demon or CE-aligned, they might well be lured into deadly situations by one.

Daemons are NE (neutral evil). They may well aid your party or ask for your party’s help; so long as and only until they are able to get from the party what they need or want. So long as there is mutual benefit, they can be trusted to a point. Create that relationship and then break it – turning friend into foe for a twist in your campaign.

Paizo also provides a nifty sort of template for what they call “Hell’s infernal dukes” (pg 15 of Bestiary 6) which may grant class levels, Hit Dice, mythic ranks, and others dangerous bonuses to a creature.  These dukes would fit nicely into this middle tier.

Enter the Archdevils. Each of the eight presented in Bestiary 6 is lord over one of the nine levels of Hell (the 9th belonging to Asmodeus; the Devil, not the snake from Redwall). The lowest CR among their ranks is 26, so they are the baddest of the bad, for sure! 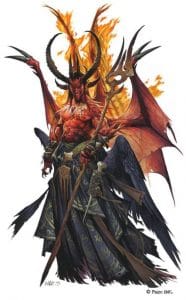 While combat with them is a potential, of course, it should be reserved for mythic characters or limited to a very brief encounter (perhaps the party interrupts a summoning ritual by the Archdevil’s cult).

But combat certainly isn’t their only utility in a campaign setting. Archdevils are Lawful Evil; meaning they are the deal makers. (Think “The Devil Went Down To Georgia.”) They’re looking to make a deal and they are creatures of their word (though their word can certainly be deceptive). I’m sure you can whip up something fun around that concept!

Each has their own cult, as well, which is detailed in the relevant Archdevil’s spread in the Bestiary covering motivations, schemes, sacred places, and symbols–literally all the tools you need to lead your party on a long journey to confrontation. The symbol as a mysterious clue linking several encounters, a couple clashes with cultists in the sacred places…there could be much to be done in Golarian long before the first foot is set in Hell.

Pathfinder Bestiary 6: Oh, The Places You Can Go

Hell is but one of the many themes around which a campaign can be written. You’ve got the qlippoth and qlippoth lords from Jewish literature, the Greek psychopomps and sahkils, and more (and that’s just from the Bestiary 6). Plenty of fodder for some excellent home-brew campaigns and encounters sure to prove not only challenging, but memorable if you take the time to build out the why and how.

And when you’re building these stories out, don’t overlook alignment! Alignment goes a long way in shaping the why and how of the story and its characters (including your PCs). Those one or two letters aren’t as insignificant or unimportant as some think!