Glass Cannon Podcast: Episode 108 – You All Meet in a Cavern

Its a good thing our party isn’t in a glass house, because someone is sure as heck throwing stones.  That’s about the only good news though as Barron’s head comes under fire from the missile hurled by an as-of-yet unknown assailant.  Find out what that creature is and how the GCP crew fares against it and whatever else might lie between them and their prize in Episode 108 – You All Meet in a Cavern.

Upon entering the mysterious Dark Passage, the party is promptly greeted by a rock to Barron’s face just as all hell breaks loose! 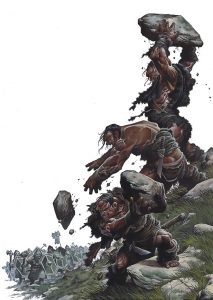 The Drift Episode 5: An Interview with Amanda Hamon Kunz, Development Coordinator at Paizo