A Book of Big Bads: A Review of Bestiary 6 for the Pathfinder RPG

[Read the following in your best infomercial salesman voice]

Are you tired of having to face another giant or dragon just to keep combat remotely challenging for your high level characters?

Does a tarrasque now have the intimidation factor of a puppy?

Presenting Bestiary 6 from Paizo Publishing! This unprecedented product does more than bring a few new faces to your next campaign, it turns the difficulty all the way up to 30. While the Bestiary itself doesn’t slice or dice, all of the creatures within can mutilate your favorite PCs in these ways and more, and with ease!

Well, Paizo’s gone and done it. No one has ever produced more than five monster manuals/bestiaries over the lifetime of a tabletop RPG, but here we are. And before we get to the new, let’s pause to appreciate the stuff that Paizo continues to do well:

In an interview (it should start at the appropriate place with that link; if not you can skip ahead to 49:30 for the relevant bits!) with the Know Direction podcast, James Jacobs (Creative Director at Paizo) had two interesting things to note about the new creature compendium:

1.  There are more high CR monsters than ever before.  He said that the previous five bestiaries had a CR spread of between 1 and 20 with a focus on levels 2-8 – or what he called “the sweet spot of gaming.” 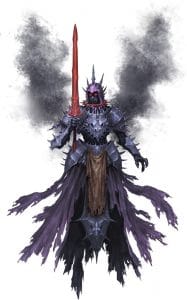 Bestiary 6, however, brings the thunder with a CR cap of 30 and nearly 50% of the creatures within coming in at CR10 or higher.  Compare that to the ~20% of CR10+ creatures in the first Bestiary and you start to get a feel for the increase in difficulty.

For funsies, I calculated the mean and median of the original Bestiary and Bestiary 6 for comparison’s sake because numbers don’t lie:

To be sure: There are, indeed, some lower CR creatures in Bestiary 6, but the biggest draw in my opinion are the higher CR mac daddies that Paizo has whipped up for us to encounter!

2.  An Adventure Path won’t get you to level 20, but these beasts will fix that.

….With Bestiary 6, I wanted to try to start solving that.

Paizo hears you! Bestiary 6 is designed for those higher level parties of yours that are leveling at a snail’s pace for splitting a CR20’s XP four ways or having not many more options beyond fighting multiple baddies to make things challenging like they were way back when you were fledgling adventurers.

And did you catch it? Did you catch the word “start” in that last sentence? Me thinks Paizo won’t be stopping with Bestiary 6…and perhaps not at CR30…

Top 7 Creatures from the Bestiary 6

We love Top 7 lists here at NoE, so I thought I’d drop a quick one on you to sweeten the pot a bit and round out the post. Of course I should note that the kaiju will be left off of this list because come on there’s kaiju now and that’s obviously frakkin’ awesome.

Alter Ego This thing is just a flippin’ cool surprise to drop on your PCs in any adventure path. The flavor texts says that an alter ego is created during “a moment of trauma, disorientation, or sudden incapacitation” and “in many cases the progenitor isn’t aware the alter ago was created.”

So you could even retcon a particularly traumatic moment in your party’s history to have spawned one of these bad boys/girls. It’ll be quite the surprise when they run into a shadowy version of themselves!

Cipactli I took one look at this creature and fell instantly in love. It has mouths were mouths have no business being and it is 100% glorious.

Clockwork Creatures Mechanical angels, assassins, fiends, guardians, and hounds that look amazing! The Assassin’s artwork reminded me of Karl Ruprecht Kroenen from Hellboy and if I’m honest…I’m kinda bummed its not a player-friendly race somehow.

Mongrel Giants Giantkind are genetically similar enough to crossbreed and crank out some truly terrifying mongrel spawn. It’s actually a template you can slap onto any creature with the giant subtype and it gets all the regular stuff for its base type plus an Ancestry Trait that showcases its mixed inheritance. Very cool!

Nekomata This catlike creature can lick a corpse up to three times a day to turn it into a skeletal champion (if it licks a skeleton) or a juju zombie (if the corpse has flesh). You only thought you killed those creatures, but thanks to the nekomata they’re back! Its flavor text is downright horrifying for cat owners, by the way… 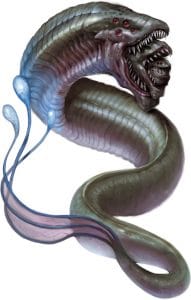 Omnipath Yet another creature with multiple mouths – these nested one inside the other like the xenomorphs from Alien – only there’s three instead of two! And you had better hope that it doesn’t hit with each successive bite (+26) because its a free action for it to bite with the next mouth in line and the consequences scale quickly. If that weren’t enough…it has all sorts of nifty psychic spells to really bring the pain!

Skincrawler  One of five CR 1/2 creatures in the book. It’s not resilient in any sense of the word, but it has some fun mechanics built into it. It is a parasite that strikes when someone is isolated and has a chance to cause a lapse in memory in its host – effectively causing him or her to forget it ever latched on and allowing it to feed indefinitely as it changes it appearance to match the host’s flesh. One doesn’t do much; in fact it will be barely noticeable to its host. But that changes if multiple skincrawlers manage to latch on…Just a very creative low level creature!

So will you be picking up Bestiary 6? It is chock full of creatures just aching to be written into a campaign and your players will undoubtedly enjoy the encounters…even if they don’t survive them.  All sorts of flavor and surprises from tiny oozes to colossal magical beasts await your bravest and mightiest of PCs.

[Disclosure: Paizo provided Nerds on Earth with a copy of Bestiary 6 for review.]

The Drift Episode 1: An Interview with Rob McCreary

Nerd Nostalgia: An Expedition to the Barrier Peaks, a D&D Classic