Sidereal Confluence: A Board Game for Deep Play Enthusiasts

All of us have the game level that we wind up comfortable with. Most of the mass of humanity is comfortable with the games like Monopoly. Some groups move forward to something of the complexity of Risk.

At the far, far end, you wind up with a game like the new game from WizKids! Sidereal Confluence.

Sidereal Confluence was created by Tau Ceti Deichmann over the course of a number of years. (There is a great article on the game’s development with Deichmann here.) The basic idea of the game is that it is a game play of what would happen as alien races came together to create a trade alliance and federation across the stars.

While the unboxing experience is daunting, as this game as a LOT of pieces, once you get the hang of game play, it could be a fun game that you can revisit multiple times. Some key parts of the game: 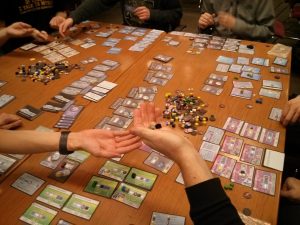 Alien Races. There are 9 different alien races that you can play in the game. While also helping to make the game re-playable and enjoyable as you take on different races, it also is helpful as they have coded the races by difficulty level, ranging from 1 to 6.

Each race has a full color sheet that explains their goals, objectives, how they work and a pronunciation guide. To play, you need at least 4 people to make the mechanics of the game work well and can play up to 9.

Negotiations. The essence of this game is negotiation and trade. It falls in that odd dimension where it isn’t an everyone for themselves game but you also can’t win without working together to some degree. A lone ranger approach will get you beaten badly. You are working with a large variety of tradable items: food & life support, culture, industry, information, biotechnology, power, ultratech, spaceships and more. Navigating all the potential options involved there are part of the excitement of the game. 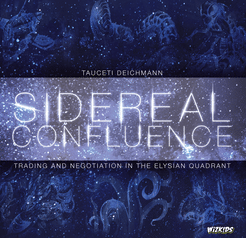 The game is always evolving. One of the worst parts of gaming in the modern age is games where each player takes a really lengthy turn. People have a tendency to tune out, grab their phone and you quickly can lose track of what is happening in a game.

This game has 3 parts in a turn and everyone plays simultaneously. As you move into trade, then economy and then confluence, everyone is engaged. To my experience, that is a unique differentiator.

It also means that the speed of game play is much quicker than you would think. 4 people can play a full game in 2 hours, which isn’t short but it isn’t also a never-ending slog of waiting.

It is complicated. For this game to move to the top of the list, it is going to take more than one play-through to get a feel for the dynamics of how it works. Because it is new, there isn’t a helpful “How to Play” video yet to refer people to as preparation to play the game.

So, be prepared to take your time for the first session or two but because of the races, the options, the collaborative nature of the game and speed of gameplay, Sidereal Confluence has the chance to be a hot game among the more dedicated gamers who like lots of moving parts and challenges.

(Disclosure: WizKids! provided Nerds on Earth with a copy of Sidereal Confluence for review.)

Enjoying King’s Struggle is No Struggle At All