Enjoying King’s Struggle is No Struggle At All

It’s hard out here for a King, apparently.

That’s what the title of WizKids’ card-based game King’s Struggle would suggest. In reality, though, players will likely have quite an easy time enjoying the game, from its well-crafted artwork to a seamless gameplay that keeps everyone involved throughout an endeavor that truly doesn’t take much more than the 30 minutes advertised on the box.

The components are simple and mostly self-explanatory, and what might not be completely clear from the cards themselves is likely explained in a very well-written rulebook.

The game is played with six decks of 10 cards numbered 1 through 10 – Peasant, Farmer, Assassin, Cobbler, Cooper, Jeweler, Jester, Knight, Queen and King, in that order. The first three are considered “serfs” and have a yellow background, the middle three are “merchants” with a blue-green background and the final four are “royals” with a purple background. Each of the six decks has its own back color to distinguish the six players. 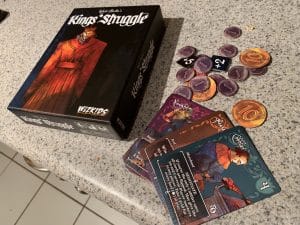 The game is played in seven rounds, which is tracked on a card with a crown-shaped token. There is also a scepter to pass along to the current player and a star to mark the first player for the current round. All of these are made of sturdy cardboard,  as are the money tokens and power modifier tokens, which we’ll discuss a bit later.

This game is simple in its set-up, and the roles of all the cards and pieces are fairly clear with a little bit of reading in the rules. That’s important, particularly if you’re not looking for a really heavy game, either due to age or simply the energy level of the group.

Trick Taking with a Twist

If you’ve ever played Spades or Hearts or any such card game, the main concept behind King’s Struggle will be easy to handle. The first player plays a card from his or her hand face-up, and then the other players place their chosen card face down. Once all are ready for action, the cards are flipped over. The basic premise is that the highest card wins, but the trick is far from over at the turn of the cards.

Each card – except that poor, struggling King – comes with an action of some sort. Some, like the Peasant, say that you win if you’ve played the only serf. Others have a “negotiation” action, and for me, that’s what truly sets this game apart. 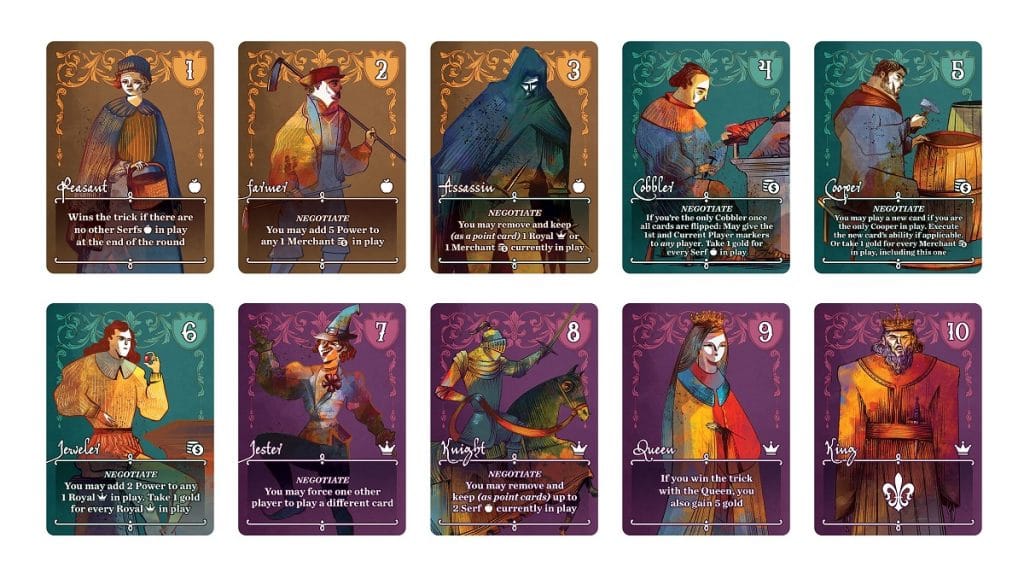 Players pass the scepter and perform their card’s action when it is their turn. Some cards have a choice – a Cooper can play a new card if he’s the only Cooper in play, or he can take 1 gold for every merchant – while others simply have a bargaining chip, so to speak. A Farmer, for instance, is only a 2, so it isn’t likely to win the turn. But his action is that he can add 5 power to any merchant, turning a Jeweler into an 11 that could beat even the King…if that Jeweler pays for the service, that is.

Each player’s turn has the potential to become a bidding war for that card’s services in winning the trick.  Assassins take a royal out of play, Jesters make someone else switch his or her card, and all these abilities might be of varying importance to opponents.  And they’re all for sale!  Sometimes you’ll pay an opponent not to use their card’s action.  Other times you’ll hire them to sabotage another player’s winning card.

Victory points at the end of the game are based on sets and runs of cards won in the seven rounds, as well as money, so there is plenty of room for individual strategy.

The only real struggle in this game is deciding whether to play Day Mode or Night Mode. In Day Mode, each player keeps all 10 cards in their hand, meaning three cards will go unused, but the player is in control of which cards those are. In Night Mode, each player shuffles his or her deck and then removes two cards at random.

As such, Day Mode allows for complete strategy. If an opponent hasn’t played his King, that means it’s still in his hand, so you may want to hold off on your Queen. In Night Mode, however, you can only know for sure what has been played, but a card you haven’t seen yet simply might not be in the game at all. So strategy is still a big part of Night Mode, but it also adds an element of risk and gambling.

Does King’s Struggle Deserve A Crown?

Both modes of this game were extremely enjoyable, and once you know how to play, King’s Struggle is an extremely quick play. Further, if anyone in your group knows how to play, it won’t take long at all to bring newbies up to speed. 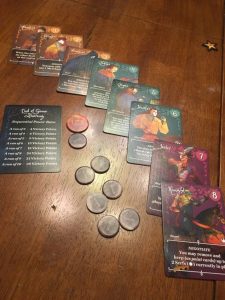 As a long-time fan of Hearts and Spades, I was really pleased with the way this game incorporated elements of those classics with the ability to negotiate and maneuver your way to victory in books you wouldn’t otherwise win. Further, in my group’s Night Mode game, Earth Nerd Adkins managed to win a game by starting with a round in which he won a nifty 1-through-5 run right out of the gate and essentially smashed us (his winning hand and cash is pictured to the right), and I still had a great time. When I lose big and still have fun, that says a lot.

In fact, just writing about King’s Struggle has me eager to play it again, and that’s a very good thing. Pick it up if you have the chance!

Disclaimer:  Nerds on Earth was provided a copy of King’s Struggle by Wizkids Games in exchange for an honest review.