Lego Star Wars set #75093, or as it more commonly known, The Death Star Final Dual, seems to be a hot item right now. I’ve owned my set for a while now, having scored it on an epic day at the thrift store. Yes, THE THRIFT STORE!! 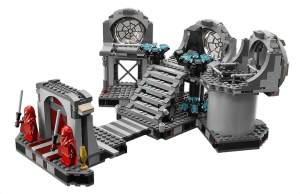 This of course is the Lego version of the scene from Return of the Jedi where Luke Skywalker is captured and confronted with the Emperor and Darth Vadar (Anakin Skywalker). Set #75093 depicts the harrowing battle of wills—and the force—between the Skywalkers and the Emperor.

Although this scene isn’t the final duel now that we have MORE MOVIES, the Death Star duel scene is still really, really awesome and has come a long way since the sets 7200 and 7201 were released. Yet this Lego set, like most, is not exactly to scale (though I would like to build my own custom Death Star around the Final duel scene now that I think about it!).

The set depicts the Emperor’s throne room and provides a long walkway to the Emperor’s trademark tall stairs that come up to his throne. This walkway can slide under the stairs, and the two platforms can swing in and attach securely to the rest of the set, making the set easier to store or display in a tighter space. Smart thinking by the Lego master builders!

Those other two platforms are the two other major parts to this scene. The catwalk that Darth Vadar cuts down as Luke tries to evade him also has some nice Lego engineering. There is an easy way to swing the pillar holding up the catwalk, so when Vadar throws his lightsaber, the pillar can be taken out with a swipe of the finger! The other platform is the shaft which Anakin Skywalker eventually throws the Emperor down. So, VERY plot crucial, in other words.

With the major parts of the epic scene accounted for, Lego spends more time on additional cool details for the set. From exploding stairs, to a catapult that propels Luke skywalker into action, to finally another catapult that ejects the Emperor’s lightsaber from its hiding place. Also, this set captures a lot of the ambiance of the throne room, with the circular glowing panels around the giant pillars in the room, computer consoles, and has sliding doors to the throne room where the Imperial guards are standing guard! 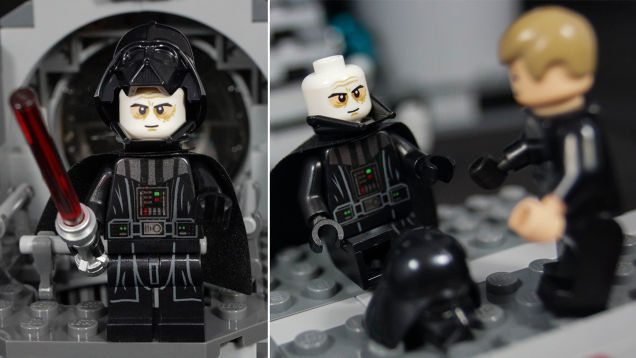 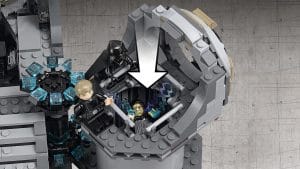 The newest version of this scene brought some very detailed outfits for the mini figures that is topped off with a cool new helmet combo for Vadar. This helmet also has a neck piece so that it covers all of Anakins face when completely put together.

Again, the great part about all Lego sets are the details, especially in regards to the franchises they have partnered with such as Star Wars.  I could go on and on about the cool little details, but you can see all those in the pictures.

This set also offers great playability with all the moving parts and whatnot.  It is currently running from $55 – $70 (new) depending on what site you are looking at, so at this price it is a nice set, that should be a focal point of your Lego Star Wars display!  This set gets a 9.1 out of 10 Nerds, but YOU MUST shop around until you score your set around the $55 mark!

Being a Nerd Dad: Family Movie Night with Nocturna