Anyone who is casually conversant with the world of Lord of the Rings could probably tell you the basics about Elves – unending life, though they can be killed in battle; very wise; very beautiful; very skilled in lore, craftsmanship, and war.

However, readers of The Silmarillion know that there’s a lot more to Elves than just what can be gleaned from their interactions with Men, Dwarves, and Hobbits. In this edition (the other articles are here) of The Silmarillion, Nerdsplained let’s take a look at the race of Elves, starting from the very beginning, and taking a look at some of the incomplete truths that a casual Tolkien fan might have about them…

Elves in The Silmarillion: Separating Half Truths from Whole Truths

Fuller Truth: Elves live all over the place.

Much of the early history of the Elvish peoples is devoted to their movements. The originally awoke in a place far to the east of any LOTR action, along the shores of a bay called Cuivienen. They lived there for some amount of time (long enough to develop language and a modest civilization) before the Valar were made aware of their existence and went to meet them.

Unfortunately, in the intervening years, Morgoth had learned of their presence and sent some of his own emissaries to poison their minds against the Valar. So it was that when the Valar arrived and invited the Elves to come join them in the undying lands of Aman, not all were willing to go. Those that stayed behind were called the Avari, ‘the Unwilling.’ They basically fade out of the story and are never heard from again.

Of those that decided to go with the Valar to Aman, some got lost along the way, some decided to stay

These distinctions are ultimately not all that important, except when it comes to…

And, truthfully, the Avari probably developed their own language, too, but since they disappear from the story they’re not really counted. The Elves who came to Aman developed the quintessential Elvish language, Quenya. It is considered the most beautiful, elegant, mystical, and meaningful language that Elves ever created. This is due, in large part, to the fact that these are the Elves who lived in the undying lands of Aman, and literally ate, drank, went hunting, and played music with the Valar themselves. Most of the longish passages of song or poetry that can be found in Lord of the Rings is the Quenya language. Quenya dominates any interaction between different groups of Elves, having been brought back over to Middle Earth by Feanor and the Noldor when they returned from Aman.

Sindarin, on the other hand, was developed over time by the Sindar, those Elves who stayed in

Beleriand, and was adopted by those who stayed east of the Misty Mountains as well. It sounds a bit rougher and less elegant than Quenya, and thus is mostly used only when Sindarin Elves are in like company, or with Dwarves – with whom they had many dealings before any Quenya-speaking Elves returned to Middle Earth.

*Fun Fact* The truly amazing fact about the Elvish languages in Tolkien’s works is that they actually exist, meaning Tolkien actually created them. He was a scholar of medieval literature and a philologist by trade. As a boy he became fascinated with Welsh and other Celtic/Germanic languages.

Over time he developed Quenya and Sindarin, complete with vocabulary, verb conjugations, sentence structure, masculine and feminine forms, multiple tenses (past, present, future perfect, etc.), and rules to govern all these things – just like any real-world language. In fact, based on some of his recorded letters and essays, you could make a pretty compelling case that Tolkien created The Silmarillion as a vehicle to get his created languages out into the world. */End_FunFact*

Incomplete Truth: Elves are like hippies that just go around living off the forest and occasionally fighting when the need arises

Fuller Truth: Elves do love peace and contemplation, but are also frequently driven to pursue knowledge and achievement, too.

Men in Tolkien’s writings seem competitive with one another, like football players – they feel a need to 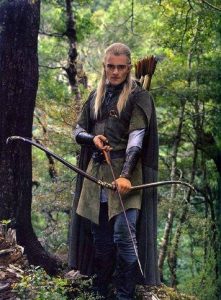 enforce their will on others, to dominate, to win. Elves feel more like distance runners – there’s a competitiveness with one another, sure, but it’s more about beating their own personal best.

For an elf like Feanor to pursue gem smithing, it’s not enough to produce a gem that’s more beautiful than what a dwarf or another elf might produce. He can’t stop until he has produced the most beautiful, majestic gem in all of creation. Similarly, it’s not enough for an elf like Cirdan to build better ships than anyone else; he has to build them to the uttermost best of his ability.

To use an analogy from another nerdy IP, Elves are a little bit like Vulcans. Because of their long lives and acquired wisdom over time, they tend to be more reserved when interacting with other races, even other Elves. But underneath that outer layer they are a passionate people, capable of staggering feats of bravery, beauty, artistic expression, and physical prowess. And, like Vulcans, they are also capable of incredible displays of anger, bitterness, and despair. In fact, according to The Silmarillion, the only ways that Elves die is either violently, or by dying of grief and weariness. The Silmarillion is also filled with stories of Elves who acted foolishly, often to great catastrophe.

Elves in The Silmarillion: Conclusion

So, in the Elves of Tolkien’s literary world we have a massive family tree complete with at least two languages, a vast territory encompassing basically all of known Middle Earth and the undying lands to the west, and a people who are capable of incredible learning and achievements when they are not quietly enjoying creation around them or growing so weary of the world that they die.

Moreover, the Elves play integral roles in pretty much every battle of import through the first three ages of the world, they give counsel to those who are wise enough to seek it, and they create some of the most beautiful works of art and architecture in all creation. They also create some of the biggest problems, act in the most foolish ways, and from time to time are the most cruel towards one another.

In short, they are complicated beings.

And if you haven’t read The Silmarillion, what are you waiting for? Get a copy here!

Nerd Nostalgia: The Howard the Duck Film of 1986