The idea was brought up that The Hobbit is a children’s book, but the Hobbit movies are decidedly not children’s movies, and therefore ruined the story in some way. Since I seem to have become the resident Tolkien authority here at NoE, I was asked for my thoughts on the matter.

Let’s start with the first question raised here – is The Hobbit a children’s story? Let me divert slightly, then I’ll come back and try to answer that question. One of my favorite worship leaders and songwriters is a guy named Glenn Packiam. Last year he tweeted this:

1. What a songwriter means
2. What the song says
3. What worshippers think the song means.

I'm learning there's a gap between each thing.

He’s talking about songs in general, and worship songs in particular, but I think the idea is true for any work of art, really.

Is The Hobbit A Children’s Book?

Tolkien himself always disputed that The Hobbit was a children’s story. Many biographies will say that he bristled or became very agitated when people referred to it as a children’s story. He himself always called it a fantasy story, or a faerie story. Of course, the descriptors “fantasy” and “children’s” are not mutually exclusive. And I think that’s where the contention and confusion comes in. Tolkien did not set out to write a “children’s book,” and he never considered The Hobbit to be one. But even the initial reaction to the book was mixed. Here is an except from a time.com (TIME Magazine) article commemorating The Hobbit‘s 80th anniversary:

“When the first edition of The Hobbit: or, There And Back Again was first published — 80 years ago, on Sept. 21, 1937 — C.S. Lewis famously called the book a “marvellous” classic-in-the-making, and the New York Times called it “freshly original and delightfully imaginative.”

TIME Magazine, meanwhile, called it…nothing. The book did not receive a review in the magazine’s pages in 1937, nor when the first U.S. edition arrived the following year.

That omission, while an obvious oversight in retrospect, is also a telling detail in the history of J.R.R. Tolkien’s first Middle-earth masterpiece. In fact, it took decades for The Hobbit to make the transition from being a well-reviewed children’s book to a work seen as one part of a classic, culture-shaping narrative.”

Stylistically, it does feel more like a children’s book. Especially when you compare it to Lord of the Rings and The Silmarillion. I’d go so far as to say that a good analogy might be that LOTR and The Silmarillion are like The Illiad and The Bible, and The Hobbit is like the first Harry Potter book. There’s a fair bit of humor in The Hobbit, found in everything from silly songs to Cockney-accented trolls to drunken elves. The story is a serious journey into danger and strange lands, but told in a light-hearted manner. The danger never feels as real and pressing and final as it does in Lord of the Rings.

Are The Hobbit Movies Meant for Children? 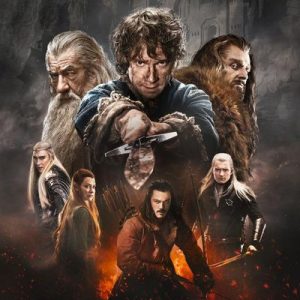 Then there’s the question of the movies. I need to be totally honest right up front – I loathe the Hobbit movies. If you don’t even factor in the source material, I think they’re terrible. And when you do factor in the deviations, additions, detours, etc., in relation to the source material, they’re on the far side of unwatchable to me. I literally can’t stomach the second or third movies at all. I like to say that the Lord of the Rings movies were Peter Jackson’s love letter to the source material, and that the Hobbit movies were Peter Jackson’s love letter to his bank account. Blech…

Let me try to be objective, though. I think that, among the movies’ many weaknesses, possibly their greatest weakness is that they don’t know what they want to be. Let’s look at some elements that lean towards them not being children’s movies, and then some that do:

The Hobbit films are Not Children’s Movies

The Hobbit films are Children’s Movies

But the initial question was, “Was The Hobbit a children’s book, and the movies botched that and ruined it for everybody?” My answer to that is that I think that the book is so good, and the movies are so bad that it’s more likely that they ruined movies for everybody. It’s much more a case of The Hobbit being a good book, and the movies ruining everything about it, mercilessly turning it into a trilogy-cash-cow whose main resemblance to the source material is that a hobbit named Bilbo found a ring. There’s just not anything redeeming about them to me, except Martin Freeman. British Jim can do no wrong…