After a grueling, resource draining combat, the party could use some R and R…Only problem is that their recent encounters have left quite a mess.  The giants are likely to increase the defenses of Skirgaard upon discovering the signs of combat.  What will our heroes do with the dilemma that bears down upon them?  Find out today in Episode 152 – Resize Doesn’t Matter.

While one party member stays behind to keep a watchful eye on the aftermath of their recent sabotage, the others travel far away to return to a very familiar place. 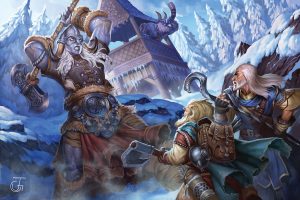 Conan is Coming to Marvel Comics