I have always been a fan of board gaming, which has predominately been with friends and family at small gatherings. We routinely feature games that are packed with fun, easy to learn, and quick to play.

My first real taste of nerdish hardcore board gaming was with the game Power Grid. For you hardcore board gamers that are familiar with PG, you are probably scoffing at how not hardcore it really is. I would classify Power Grid as the gateway drug to the more intense and involved board games that I now cherish and play. Allow me to introduce you to one of my favorites, Power Grid! 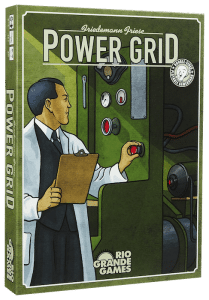 Power Grid is the most recent update of the popular Friedemann Friese board game Funkenschlag (which is commonly referred to as a Crayon game for its use of, you guessed it, crayons in a non-fixed game board) and is produced by Rio Grande Games.

Power Grid ditches the crayons from the City Network building of the original, with a permanent game board layout and a rigid payout schedule. All the while retaining most of the signature features, like the power plant auction and the ever-changing resource market.

The object of Power Grid (as the manual states) is to “represent a power company, which works to supply electricity to its cities and customers. During the game each player buys power plants at auction, buys resources to produce electricity in those power plants, and builds a network of cities to supply with electricity from his/her power plants. In the end, the player with the most cities with power wins the game.”

Power Grid: Why it’s Worth Your Time

Power Grid boasts a very level playing field. Whether it is the player in last place goes first round-by-round aspect, the “spend money to make money while helping your opponents” game mechanic, the inherent advantage to buying last at the power plant auction, or the fluctuating cost of resources on the open market; Power Grid throws enough wrenches at the person in first place and a few bones to the person in last to keep everyone involved and jockeying to win the game until the very end. I not only appreciate this, but I love it! How many times have you invested in playing a hour+ board game and been stuck in the unfortunate position of last and not had a way to change your fate? My guess is that we all have, Power Grid aims to keep everyone vying for first until the final round. 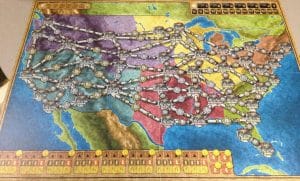 If you love complex strategy, then this is your game. Like I stated above, there are enough quirks to the game and mechanics to keep all players involved, that Power Grid by nature is a strategy heavy game. I dig games that require you to plan and operate in several phases at once. PG scratches the strategy itch very well!

I also appreciate the aesthetic of the artwork and overall design of the game. If you’ve read my previous reviews, you know that the design, fit & finish, and aesthetic of any board games are a huge deal to me. Power Grid is complex, and final product of the game takes this into account by providing a layout and design that accommodates it’s complexity while still making it pleasant to the eye.

Power Grid: Why You Might Want To Move On

It takes time to pick up. Whether you are a novice exploring a new board game genre or seasoned vet, Power Grid is complex in its setup, play, and strategy. Even the best player who has experienced PG before still requires a refresher how-to every time. For many, the complexity of the game is the draw, the new challenge, but many more this is one thing that turns them away. If you don’t appreciate a deep and complex board game, then move along my friend.

Get ready for a lonnnnnng game. The box discloses a 2+ hour game play estimate. I have played Power Grid dozens of times and have never played in less than 2 hours. Never. Power Grid is very much akin to those long games of Risk that started in many a basement den and were abandoned, or at least postponed, due to the time involved. Obviously, the fewer the players in a game the quicker it goes, but if you plan on playing, prepare to hunker down.

Power Gird is a great game and one of my personal favorites. I was initially drawn to it because of it’s design and genre. Plus it’s German, and they really know how to make board games. But what I have discovered is that it is a perfect blend of complex strategy, level playing field, and fantastic design.

If you’re looking for a game that is slightly more in-depth than a Settler’s of Catan, then give Power Grid a try. I do have to warn you, if you play Power Grid, you will love it. And before you know it, you will be spending hours in your basement, hand painting Warhammer figurines and texting your buddies about your next LAN party.

Review of Wise and Otherwise: The Game Where the Beginning…