I admit that I like the game part of roleplaying games more than I like the roleplaying part. My favorite words are “roll initiative.” But that doesn’t mean that I don’t enjoy building a story around my D&D characters. 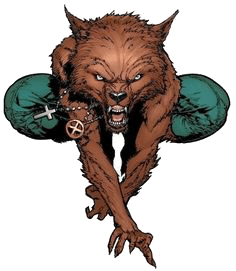 One thing I like to do is to reimagine some of my favorite comic book characters as if they were D&D characters. Most recently, I did this Rahne Sinclair, Wolfsbane, a long time member of the X-Men New Mutants team. (It’s ridiculous we haven’t written about the New Mutants more on Nerds on Earth, seeing how much many of our writers love them. Expect this to change soon!)

Rayney Frostwolf is a level 3 druid that was created to serve as a drop-in character in a Curse of Strahd campaign that many of us Nerds on Earth writers are involved in. A druid was chosen for this campaign for a few reasons:

The party didn’t have a whole lot of spell casting utility. Other players requested a wizard, but I felt it would be a bit on the nose to perfectly drop in the exact type of character that the party needed. But a druid works well enough. 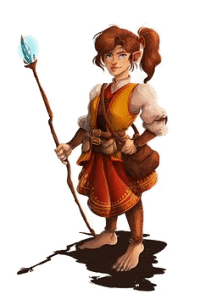 A D&D 5e druid is a fairly useful spell caster, and while they lack the creativity and diversity of a spells that a wizard would (particularly at higher levels), a druid brings a lot to the table (pun intended). For cantrips (at will spells that can be cast any time you want) I chose druidcraft, which allows little nature-based tricks, and frostbite, which would give Reyney an low-level offensive spell (more on frostbite later).

For 1st and 2nd level spells, I aimed for variety for Reyney. I chose:

So druids are fairly useful spell casters in D&D 5e. (And consider buying spell decks, which are decks of cards that list our all the druid spells. They are great to have!)

D&D 5e druids are also useful in melee combat. Let’s be honest, most folks who roll a druid do so in order to Wild Shape into an animal, which is the core ability of the class. D&D lore around druids is pretty great and it rightly imagines druids as having a reverence for nature, organizing them into circles that share a similar perspective on nature and geography.

You can have arctic druids, mountain druids, forest druids, etc. and those characters have the flavor of that particular geography. But there is also druids from the Circle of the Moon, who are known to be as changeable as the appearance of the moon and mechanically have bonuses to their shapeshifting ability. Want to play as a bear or a wolf? Then Circle of the Moon is for you. 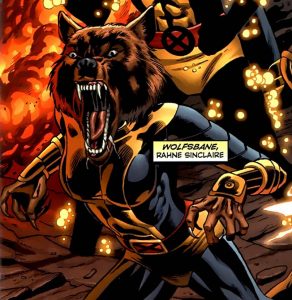 I created Reyney fit the flavor of the source character. Rahne Sinclair’s mutant power is that she can transform into a wolf, something that was very visual and cool in the old New Mutant comic books. A Circle of the Moon druid is a perfect fit, being as it allows a CR 1 (challenge rating) creature, the dire wolf!

Transforming into a dire wolf is a perfect fit to serve as a nod to the comic book character Rahne Sinclair. Plus, a dire wolf has pretty nice hit points and a bit attack that does 2d6+3 damage. A dire wolf also adds some other nice abilities:

I created Reyney to fit the flavor of the setting. Curse of Strahd is a gothic horror setting, so the lycanthrope werewolf angle fits the flavor well. Rahne Sinclair is a shy red-headed Scottish girl in the comics, so I rolled her as red headed halfling who found herself alone because her father was vehement that her druidic abilities were evil and abhorrent.

She was originally from a northern region, so I played up a “frosty” angle that highlights ice spells, as I also imagine her red wolf fur has white tips around the muzzle.

And that’s not all. I love the depth of D&D. I’ve never been a power gamer. I’ll often forego the optimal in order to get a little more flavor, but that doesn’t mean I don’t like the little things. A stout halfling as the Brave racial ability, which is helping in a Gothic horror setting where freight effects often come into play. Halflings are also lucky, so I can reroll a 1 if it comes up on the ‘ole 20-sdied die.

I like the character, which pretty much automatically means she’ll die quickly and I’ll need to roll another  character. That’s OK because we’ve rolled up more New Mutants characters for D&D 5e, so it would give us an opportunity to share those.

For now, here’s a downloadable PDF of Reyney Frostwolf, courtesy of Hero Lab. She’s since leveled up to level 4! Feel free to use her in your games if you wish.
[ninja-inline id=10231]