I wasn’t planning on writing a review of Curse of Strahd. Book reviews are a lot of work. It’s a couple days to read and digest the book, an hour to formulate and organize my thoughts, an hour or more to write, then another hour to edit and polish everything up. To be honest, it’s much less work to make a list of 7 Weird D&D items, and lists get more pageviews anyway.

But then I flipped through Curse of Strahd. The book is beautiful. And being that I judge them by their covers, it would be a mistake not to at least read the introduction, right? Oh, this is interesting. Maybe I can rearrange my schedule to get a little more reading in… Well, by chapter 6 I had forgotten to eat, I was so enraptured by the book.

So here I am, writing a review of Curse of Strahd.

Review of Curse of Strahd: Ravenloft for D&D 5e 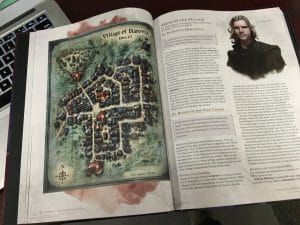 First, let’s cover our bases. Curse of Strand is D&D‘s latest adventure, and it is based on the classic I6 gothic horror Ravenloft module from yesteryear (1983). You’d be hard pressed to find an “all time best” list where Ravenloft isn’t represented, and it is in no danger of losing its appeal, given the refreshed interest Curse of Strahd has generated. Sometimes there is no school like the old school.

The lead designer for Curse of Strahd is Chris Perkins, with help from Adam Lee, Richard Witters and Jeremey Crawford. In a coup, Curse of Strahd was created in consultation with original Ravenloft designers Tracy and Laura Hickman. This allows it to be a retelling very much within the spirit of the original, yet also include hundreds of pages of new information on the lands around Castle Ravenloft and its vampire big bad, Count Strahd von Zarovich.

Speaking of hundreds of pages, Curse of Strahd is 256 pages in fact, which swells far beyond the 32 page original module. And not a single page is wasted. The adventure is designed to take players from levels 1-10, and Appendix B includes a mini adventure, Death House, to advance characters quickly to 3rd level, making them a little less squishy. 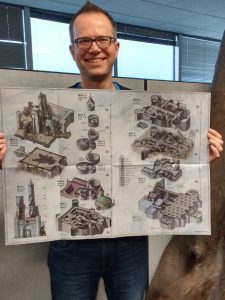 Again, it is a beautiful book, and filled to the gills with story and adventure. WotC’s art, layout, and editing team shine throughout the book. As a bonus, Wizards of the Coast provides downloadable content for easy handouts. But the pièce de résistance is the fold out map that is included in the back. On one side is the land of fog-covered Barovia, while the other is an isometric view of Castle Ravenloft. I make a motion that all RPG products should include maps like this. Who seconds?

Curse of Strahd isn’t very “crunchy”, keeping with the vision of D&D 5e. Although there is a lot of location information, this isn’t a source book. Rules wise, there is a new “Haunted One” background, some gothic trinkets, a monster hunter’s pack, and some new magic items and NPCs and monsters, but no new classes or spells are in the book. 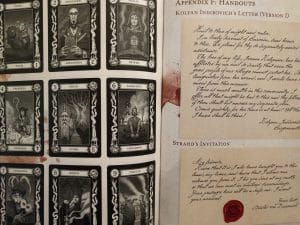 Some might dismiss this as “fluffy”, but Curse of Strahd sets out to be very much an adventure book and succeeds brilliantly in that regard. But mechanically it is important to point to the inclusion of the tarrroka deck, which is Ravenloft’s version of tarot cards. The tarroka is essential to Curse of Strahd in the helpful sense that it provides gothic atmosphere, but mainly because the deck serves to randomize each play through, giving the adventure replayability. The DM draws cards randomly before the adventure begins, allowing the cards determine story elements that are important to defeating Strahd. Old school.

I fully admit that I’m simple and low brow in my tabletop gaming. You’d think I’d value role play, solving puzzles, and intriguing interactions. Nope. I want to methodically work through a dungeon, murdering everything we encounter.

Certainly, there are witches, werewolves, and wraiths galore in Curse of Strahd. But any good review of Curse of Strahd needs to be honest that this isn’t primarily the play style of this book. Yes, you get to murder things and loot their corpses. High five!

But much of Curse of Strahd is predicated on social interaction, so much so that there are tips to level via milestones, accommodating the emphasis on social encounters. DMs and players that prefer role play will love it. 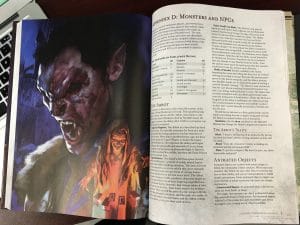 The success of Curse of Strahd falls on Strahd as a character, not as a stat block. Multiple pages are given to detailing how he ticks and how to run him during the adventure. Based on this, the characters attempt to hunt down and destroy the dread lord Strahd, while he attempts in turn to destroy or corrupt the characters.

Many paths will meander in various directions before this final confrontation, but in the end they will face him, because that’s how it works in a good horror story. There is combat, yes. Yet in the end, the designers have provided an either/or ending scenarios:

If you love vampires and gothic horror then Curse of Strahd should be owned by you.

But if I’m at my core a hack and slasher, why am I being effusive in my review of Curse of Strahd, being that the book doesn’t even really scratch the itch of my play style? Well, it’s just so darned well done, that’s why. 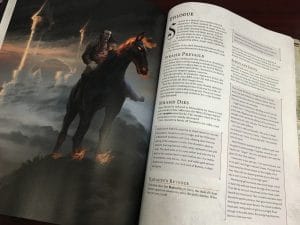 As Nerds on Earth primarily targets those newer to tabletop role playing games, I can’t help but give some head space to how a new player would process this book, versus how a 30 year veteran of D&D would approach it.

I can imagine the old guard wondering why we even need Curse of Strahd, being that the original Ravenloft holds up as one of the all-time bests. “It’s just another reboot, a grab for cash,” I can imagine them grumbling.

But for those of you who may be new to D&D or considering giving it a try, Curse of Strahd is much more expansive than old school Ravenloft, while providing the same tone, flavor, and depth. It is absolutely the best iteration of Ravenloft to date, and I say that definitively. Buy this book.

7 Reasons Why You Should Be Playing Board Games