How to Level Up Your Pathfinder Game: The Advanced Player’s Guide

By Michael Ray Johnson On May 8, 2016 Last updated May 8, 2016
Share TwitterReddItPinterestFacebookEmailPrint

As great a game as the Pathfinder RPG is, there’s no denying that it’s a complicated one with a huge number of rules and options. As such, it can be intimidating to break into.

A couple of weeks ago, I talked about what options exist for breaking into the game and learning how to play it. However, even once you’ve learned how to play the game, Pathfinder can still seem intimidating with the sheer number of additional options available for it.

Strictly speaking, you don’t actually need any of those other options. The core rules provide a complete game. As long as you’ve got a few people together and someone willing to be the gamemaster, you’re covered and can potentially play for years without ever adding another book. However, many people enjoy adding new options and ideas to their games and letting their games grow.

But which additional books should you start with? There are a lot of Pathfinder books out there—when you take into account the Pathfinder Compatibility Licence (which allows other companies to produce material for the game), there are literally hundreds of them. Even sticking to just books by its publisher, Paizo, the number is astonishing. To know where to start, it’s a good idea to know what these books contain and what they can potentially add to your game.

To begin with, it’s important to recognize that Paizo publishes several different lines of Pathfinder products. These include Pathfinder Adventure Path, Pathfinder Campaign Setting, Pathfinder Player Companion, Pathfinder Pawns, and more. The name of the line identifies the type of products you can find in it.

For this and the next couple of articles, I am going to be focusing on products in the Pathfinder Roleplaying Game line. The products in this line are mostly hardcover books (though there are exceptions) that focus on rules options, and include the products I discussed last time (the Core Rulebook, Beginner Box, and Strategy Guide).  I will look at some of the other lines in later articles.

One of the most well-known and well-loved Pathfinder books is the Advanced Player’s Guide. It is one of the earliest rules expansions published for the game, released less than a year after the Core Rulebook.

The Advanced Player’s Guide stands out as the book that began to give Pathfinder its own identity separate from Dungeons & Dragons. The core rules are a straight revision of D&D 3.5 and don’t contain much that is truly new.

On the other hand, the Advanced Player’s Guide starts doing entirely new things with the game. First up, it introduces six new classes that start to provide Pathfinder with its own unique flavour. Most of these new classes had no equivalent in earlier editions (cavalier being the only notable exception) and fill niches that had been mostly ignored previously. All six of the classes (alchemist, cavalier, inquisitor, oracle, summoner, and witch) add something brand new to Pathfinder. 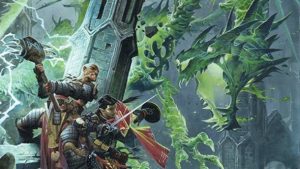 The Advanced Player’s Guide has lots of new spells, feats, and magic items usable by not just the new classes, but all other characters as well. But it also adds a number of new rules options as well, including new types of combat maneuvers (dirty trick, drag, reposition, and steal), hero points (which give characters a limited resource for bending the rules a little), and traits (which help define your characters’ backgrounds by giving them a few minor ability bonuses).

However, the most notable new option in the Pathfinder Advanced Player’s Guide is the introduction of archetypes, which allow you to further specialize your character beyond your base class. Archetypes swap some of a class’s special abilities for new ones, allowing a far greater breadth of character options than the core rules alone. For example, roughrider is a fighter archetype that replaces the fighter’s weapon and armour training abilities with various riding tricks. A roughrider is still a fighter, just a little different. Archetypes are, perhaps, the things that have most solidified Pathfinder as its own game separate from D&D, and almost every rulebook published since the Advanced Player’s Guide has included more archetypes to add to your games.

Of course, there are other books out there that you might be interested in. Next time, I will take a look at a few of them, including Ultimate Magic and Ultimate Combat. Until then, happy gaming!

[It’s an excellent book and you can pick up the Pathfinder Advanced Player’s Guide here or read in-depth reviews of dozens of other Pathfinder products at Of Dice and Pen.]

A Brief History of the Atomic Knights, Part II

What We’re Reading at Nerds on Earth: A Glimpse at Our Nightstands