By Jason Sansbury On May 22, 2016 Last updated May 8, 2018
Share TwitterReddItPinterestFacebookEmailPrint 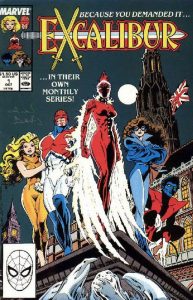 In the prime of the Chris Claremont era, there was no such thing has too many X-books. It started with Uncanny X-men, added New Mutants, then X-Factor and eventually, Chris Claremont decided to take a chance of a partnership with artist Alan Davis to create a UK centered team, Britain’s Excalibur.

The core of the Excalibur team were refugees from main X-men team, coming after the Mutant Massacre. Out of that time, you wound up with a wounded Shadowcat and Nightcrawler, both recovering with Moira MacTaggert at her base on Muir Island.

Added into the mix, there was the return of Rachel Summers aka Phoenix, who had a limited series set up after she was wounded by Wolverine and fell into the trance of Spiral, originally a Longshot villain who was becoming more and more often a thorn in the X-men’s side. When that limited series never came to fruition, they picked up the plot and ran with it as Rachel Summers was introduced as a mainstay of Excalibur. 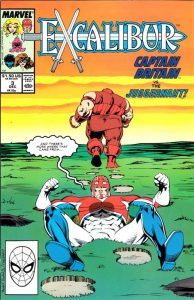 That trio was joined by Brian Braddock, aka Captain Britain, a British superhero whose powers were mystically based, even though his mutant sister Psylocke was part of the team. Though a Marvel UK property, Braddock had made appearances in the US Marvel books, probably most notably as a roommate for Spider-Man at one time.

And the team was rounded out with Meggan, a shapeshifting powerhouse who was overall a very odd character, especially because she was essentially raised by television.

‘The early era of the book is marked by two things: 1) deep sadness and 2) a call to be heroes. This title was launched in the era where the X-men are thought to have died in a televised battle in Dallas, Texas.

While they really were just reborn and moved to Australia, as one does, the X-men on Excalibur don’t know that, which creates deep sadness for Nightcrawler and Kitty Pryde, as they have lost their friends and for Captain Britain, who has lost his sister. But out of that, there is a sense of a need to carry on and be heroes in the honor of their fallen friends and loved ones. 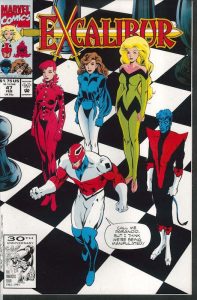 Excalibur was a very unique book for its era. It was equal parts mutant and X-men-y but it also didn’t shy away from the mystical roots that were laid down for Captain Britain in earlier UK runs of that character.

By the time you throw in the multi-verse and the ways Claremont played with it, you wind up with a very interesting book. Books like the Exiles owe a great deal to Excalibur, because it paved the way for things that became much more prevalent in future work. (Exiles is a book centered around the idea of various heroes from various multiverses partnering together on teams to fight back against the various evils of the world; to me, the heart of that book starts in the way Excalibur used similar ideas, including introducing various Captain Britains from various alternate universes.)

As a book, Excalibur had a really long run, though most people tie its best issues to being the ones where Chris Claremont and Alan Davis were involved directly, as writer or, in Davis’ case, writer and artist. 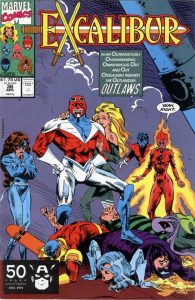 It has to be said, Alan Davis and his work on this book is amazing and might be one of my favorite runs by an artist ever. He has a very unique style that was such a fantastic match for these characters and stories. After those creators left the book, there were some strange turns, most notably an era where they removed Captain Britain and basically wanted the book to be a third X-men franchise solely, and an era that is regarded highly where noted writer Warren Ellis took on the book.

Since that run in the 1990s, you see the British characters return at various points and in different franchises. Clearly, they seem to be beloved, though no one has quite figured out how to best use them in a series over the long haul. Despite showing up in those places, Excalibur is a great team and book that you should definitely check out.

A Brief History of the Atomic Knights, Part III