By Jason Sansbury On May 23, 2016 Last updated Aug 13, 2018
Share TwitterReddItPinterestFacebookEmailPrint

With Captain America: Civil War still going strong in the theatres, you might be curious about what comes next in the comics. While the endings of the movie and the series have some significant differences, there are enough similarities that it makes you wonder what could come next. So what happens if suddenly all these heroes signed and reveal their secret identities? 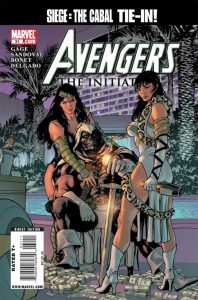 In Marvel Comics, it was known as the Avengers Initiative. As heroes signed up, they became agents of the state, and when you have as many heroes as they did suddenly suited up and ready for duty, you had to have somewhere to put them!

While New York City has long been the center of the Marvel Universe, as a reader, you did have to wonder why all the villains didn’t just move to Portland, take over everything and put a bird on it. In this time in the Marvel Universe, there is an easy answer: the Force of Nature aka Oregon’s very own superhero team!

The Avengers Initiative was a program where heroes were put on teams, then sent to states to guard and defend them. With Iron Man in charge, heroes were guarding far off places like Iowa, and taking down crime across all 50 states. It made for a very interesting dynamic as you see what characters were assigned to what teams and what the team names were.

At the same time, the Initiative also recognized that there was a need to train new heroes, or people who have powers but no developed skills. In the comic book series Avengers: The Initiative, you get a great story that lasted for many issues, as you watch groups of mainly younger heroes get trained, deployed and what happens next.

Avengers: The Initiative was really great series and you see some interactions that work really well and some new characters that are still some of my personal favorites introduced in the last 10 years. (Seriously, there had been a long drought of new characters being made until this series.) The series is built mainly around Hank Pym, the original Ant-Man, serving as a mentor and teacher alongside heroes and villains, most notably the Taskmaster, who is a favorite around here at Nerds on Earth. 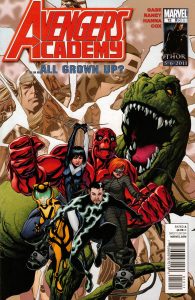 And just as the series was launched out of a major event (Civil War), it comes to an end in another event (Siege), but spins off some of the characters in another fairly long running series: Avengers Academy, which took on some of the best parts of the earliest X-men stories (teenagers learning to be heroes) while updating it for the modern age.

And the same characters go on to be found in Avengers Arena, and then Avengers Undercover, which is an excellent comic run that doesn’t get enough hype; sure, the elevator pitch of Hunger Games meets teenage superheroes sounds ridiculous but the creators make it work extremely well.

If you were to put all of these issues together, you have a solid near 100 issue run mixing relatively new characters into the Marvel Universe in a compelling way, albeit with a less than great finish in Avengers Undercover. 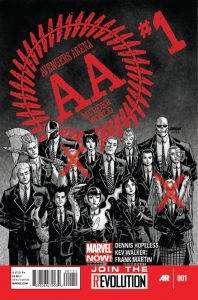 For the most part, the run was allowed to breathe on its own and took the moments of major changes in the Marvel Universe (Secret Invasion, Dark Reign, and Siege storylines) and used it to propel the characters and “series” to the next level. That isn’t something you see much in comics anymore and it is due in large part to the excellent writing of Dan Slott, Christos Gage and Dennis Hopeless, who all have a great read on these characters and who manage to put them together in ways that make you think, while adding in new characters as well.

In a perfect world, Netflix would agree to a series of episodes, maybe even 50 of them, where each state’s’ team gets one story. I doubt that will ever happen but it would be phenomenal fun. The truth is that I doubt this is the next stage of the Marvel cinematic universe but it certainly is worth reading in the comics and dreaming about what could be.
And if you are curious if your state’s team was ever represented in the comics, you can see the very comprehensive list of teams and members here on Wikipedia.

The titles are available on the Marvel Unlimited app, and Amazon has great deals on the trades:

Dungeons and Dragons: Are Wizards Cruel to Animals?

A Recap and Review of Agents of SHIELD Episode 320:…