Avengers Academy Review: Can superpowered teenagers be taught to be heroes?

Jason is kinda like the Obi Wan to my Luke Skywalker when it comes to comics.  I was just tinkering with droids (video games) on Tatooine (but really my den) when he shows up, tells me of something greater (comics, among other things), and sends me on an adventure.  Only Jason never lied to me about my dad.

He’s already pitched Arena to you, but I’d like to invite you to back up on the timeline to the 39 issues of Avengers Academy.  Norman Osbourne snatches up several teens during his Dark Reign and experiments on each in an attempt to magnify and harness their unique and potentially devastating power sets.  Hank Pym, Tigra, and a rotating cast of Avengers step in and take the teens underwing.

At first it is barely more than the Avengers’ attempts to monitor the teens who were at risk of choosing the Dark Side over the Light.  However, the heroes and heroines soon come into their own and develop well beyond Pym’s predictions.

What this series does better than most:  Portray teens as heroes rather than heroes as teens.  What I mean by that is the students are teens first, not tangentially.  This hero/heroine business is new to them and they have their own priorities.  Some of the subplots that did this best:

Teenage Naivety.  The students think they’re somewhat invincible (and what teenager doesn’t?) and rush off into all kinds of trouble assuming that their powers give them an absolute advantage and forgetting a) that they’re not the only ones with gifts, and b) that they are relatively untrained.  They also think that they know best (and what teenager doesn’t?).  There’s a moment early on when the students take it upon themselves to avenge Tigra when a video of her being assaulted by the Hood goes viral.  They think they’ve done the heroic and upright thing, but Tigra explains otherwise – a very poignant learning moment. 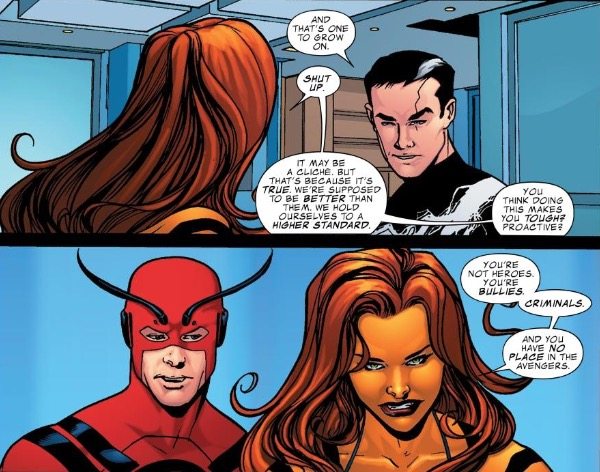 The Pursuit of Purpose.  Throughout the series, all of the students wrestle with whether or not their powers are a blessing or a curse.  Hazmat feels a prisoner inside her containment suit, Veil’s powers threaten to make her permanently immaterial, Striker tries to leverage his abilities for fame, Finesse is seduced by villainy, Reptil strives to emulate his childhood hero, and Mettle misses the sensation of touch and the joy of surfing…They all wonder who they’re meant to be, feel somewhat pigeonholed into a life they don’t want, and feel robbed of having the chance to be a normal teens with normal and important teenage experiences.  Some will go to great lengths to regain normalcy.  Others will selflessly sacrifice normalcy for the greater good.  They’re all burdened with the pressures of heroism on top of the pressures of teenage life, and the combined effects are well showcased.

Love.  Romance gains traction in the teen years and the students have 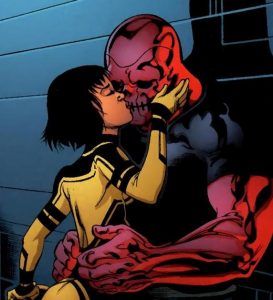 trouble navigating those waters amidst the heroism and the limitations set by their powers and abilities.  This tension is done so, so beautifully between Hazmat and Mettle. Mettle is the only person that can be near Hazmat outside of her containment suit, but he can’t feel anything.  And Hazmat is extremely jealous of any contact Mettle has with any other females because she feels he’s her only chance at love.  Their romantic subplot is so wonderfully done!  Then there’s Striker who wrestles with his sexual identity, its origin, and its impact on his public image.

In my opinion:  The superhero-ness of Avengers Academy is secondary to the highly relatable story of all of our teenage years.  I haven’t resonated with a set of characters more than these in a long time.  The struggle is real in Avengers Academy – which is available in its entirety on the Marvel Unlimited app.

Thoughts on the Second Half of Daredevil