Comic Characters You Should Know: Longshot

This post is part of a series where we lift up characters that we think that you should know and I am looking at the comic character Longshot, a character that is often associated with the X-Men but who had a much different beginning!

First up, how was Longshot created?

Longshot is the creation of the writer Ann Nocenti.  Ann is one of those people that I think doesn’t get enough credit for some of the amazing work that she has done.  Her work in editing the New Mutants and Uncanny X-men during the Claremont era was foundational and her run on the book Daredevil from around issue 236 to 291 is vastly underrated.

So when she originally dreamed up the character of Longshot, she began not with superhero backgrounds in mind but instead from the ideas of existentialist writers.  So, Longshot was created to be a blank slate who is finding his way into existence.  And though deeper a back origin story, Nocenti created a great character whose story was supported with the amazing art of Arthur Adams.

Arthur Adams is without a doubt with one of my favorite artists.  And though he makes amazing work, he hasn’t been able to ever really survive a series because of the pace of his work.  Instead Adams winds up doing one-shots and cover work.  Longshot is one of the few pieces that he has done in its entirety, because the miniseries was done in such a way that it was independent from the rest of the Marvel Universe’s stuff, so it wasn’t on a timetable and could be held until it was nearly finished.

The self-titled miniseries ran over 1985 and 1986 and was an immense hit. And you need to know that there are some very 1980s elements to the series. For instance, Marvel made sure that Longshot was the first of their characters that sported a mullet. After escaping the realm that he was created in, Longshot becomes a stuntman, which is a pretty genius way to use his powers. And many people blame Longshot as being the inspiration of the era of pockets and pouches that came later in the work of people like Rob Liefield.  There are a lot of words and a lot of meet-ups with heros, which are both far less common nowadays.

What are Longshot’s powers?

To balance Longshot’s throwback era, let’s use a new school source to communicate his powers and equipment. From Wikipedia:

Longshot was created through genetic engineering. Longshot has only three fingers and an opposable thumb on each hand and two hearts. He is superhumanly acrobatic (speed, agility, dexterity, flexibility, reflexes/reactions, coordination, and balance). He also has advanced healing abilities.

He has the ability to affect probability fields through psionic means in order to give himself “good luck” in his activities. This allows incredibly unlikely events to happen in Longshot’s favor.

Longshot can read “psychic imprints” that people leave on objects that they have handled, and thereby learn the thoughts that an individual had while handling the object, a phenomenon known as psychometry. He can also telepathically “read” the recent memories of a person by making physical contact with him or her.

Longshot carries cleaver-like blades, stored in a bandolier, which he hurls with inhuman accuracy or in some cases, completely dependent upon his luck powers. He is also shown as proficient in other types of bladed weaponry.

Longshot is an extraordinary acrobat, and has superhuman agility due to having hollow bones but musculature like a human’s. 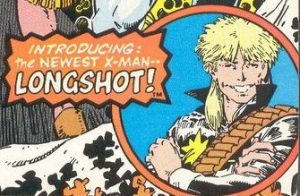 Longshot was obviously popular and it wasn’t long before he is co-opted into Marvel’s most successful franchise at the time, the X-Men, showing up in an annual and eventually joining the team.  Longshot goes on to have a relationship with Dazzler (He also appears to have a power that makes women be attracted to him, which no doubt emanates from his mullet.), join the Exiles for a bit and land on X-Force for awhile.  But his origin story in this first mini-series is definitely worth checking out!

The series is an 8 out of 10 nerds, with the only real negative being the 1980s stuff that makes this a bit of a challenge to modern readers.

Marvel Strike Force: So You Want to Be a WAR MVP?