When you are a comic book reader, every once in a while, you’ll hear an elevator pitch that makes you roll your eyes.  So when I heard: teenaged superhero Hunger Games, I had to see an optometrist to get my vision back. Seriously, when you hear that is the pitch for the Avengers Arena, you probably understandably are skeptical. But let me tell you, you are wrong.

What is Avengers Arena? 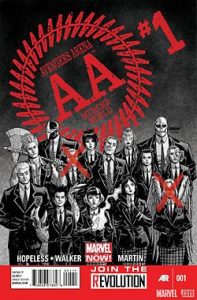 Avengers Arena was an 18 issues series that had that basic plot: throw together 16 odd C-list level teenage superheroes into a world where they have to fight their way to the death. But…it is SO good.

Dennis Hopeless (writer) and Kev Walker (artist) do an amazing job of taking a questionable idea and making it really sing. Using characters from such comics as Avengers Academy and Runaways, along with a few other odd creations like Death Locket and some British chaps from the Braddock Academy. It is an interesting hodgepodge of characters and yet it works really well.

Without giving away too much of the series, there are a few things that are done really well:

Avengers Arena is definitely worth the read. It is a commentary about child soldiers but even more so about Marvel’s child supersoldiers (no relation to Steve Rogers). And it is done in a way that really makes you think. I definitely recommend it, especially if you are a fan of young adult fiction or series like The Hunger Games. The whole series is available on the Marvel Unlimited app.

Recap and Review of Agents of SHIELD Episode 218: Frenemy of My Enemy